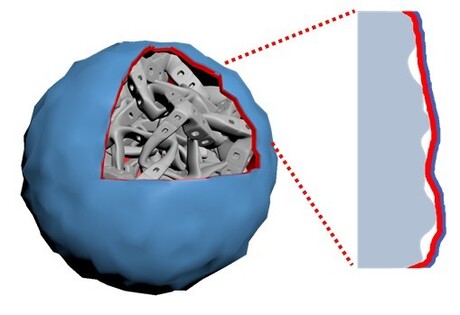 Lithium-ion batteries have in recent years become better at supplying energy, but the current generation of batteries never reaches its highest energy potential. Scientists at the U.S. Army Combat Capabilities Development Command’s Army Research Laboratory, in collaboration with the University of Maryland, now believe they have found a solution.

The team designed a self-healing, protective layer in the battery that significantly slows down the electrolyte and silicon anode degradation process, which could extend the lifespan of next generation lithium-ion batteries. Published in the journal Nature Energy, their battery design increased the number of possible cycles from tens to over a hundred with little degradation.

Lithium-ion batteries generally use graphite anodes, which have a capacity of about 370 milliamp hours (mAh) per gram. But anodes made out of silicon can offer about 1500–2800 mAh/g, or at least four times as much capacity.

The researchers said silicon particle anodes, as opposed to traditional graphite anodes, provide excellent alternatives, but they also degrade much faster. Unlike graphite, silicon expands and contracts during a battery’s operation. As the silicon nanoparticles within the anode get larger, they often crack the protective layer — called the solid electrolyte interphase (SEI) — that surrounds the anode.

“Others have tried to tackle this problem by designing a protective layer that expands when the silicon anode does,” said Army scientist Dr Oleg Borodin. “However, these methods still cause some electrolyte degradation, which significantly shortens the lifetime of the anode and the battery.”

The team at the University of Maryland and the Army Research Laboratory decided to try a new approach. Instead of an elastic barrier, the researchers designed a rigid barrier that doesn’t break apart — even when the silicon nanoparticles expand. They developed a lithium-ion battery with an electrolyte that formed a rigid lithium fluoride (SEI) where the electrolyte interacts with the silicon anode particles, substantially reducing electrolyte degradation.

“We successfully avoided the SEI damage by forming a ceramic SEI that has a low affinity to the lithiated silicon particles, so that the lithiated silicon can relocate at the interface during volume change without damaging the SEI,” said Professor Chunsheng Wang from the University of Maryland. “The electrolyte design principle is universal for all alloy anodes and opens a new opportunity to develop high-energy batteries.”

The battery design conceived demonstrated a coulombic (the basic unit of electric charge) efficiency of 99.9%, which meant that only 0.1% of the energy was lost to electrolyte degradation each cycle. This is a significant improvement over conventional designs for lithium-ion batteries with silicon anodes, which have a 99.5% efficiency. While seemingly small, Dr Borodin said this difference translates to a cycle life more than five times longer.

“Experiments performed by Dr Chunsheng Wang’s group at the University of Maryland showed that this new method was successful,” Borodin said. “However, it was successful not only for silicon but also for aluminum and bismuth anodes, which shows the universality of the principle.”

The new design also came with several other benefits. The battery’s higher capacity allowed the electrode to be markedly thinner, which made the charging time much faster and the battery itself much lighter. In addition, the researchers found that the battery could handle colder temperatures better than normal batteries.

“For regular batteries, colder temperatures slow diffusion and may even freeze the liquids inside the batteries,” Dr Borodin said. “But because our design has a much higher capacity, thus ions have to diffuse shorter distances, resulting in a significantly improved low-temperature operation, which is important for warfighters operating in cold climates.”

According to Dr Borodin, the next step in the research is to develop a larger cell with a higher voltage using this design. In light of this goal, the team is currently looking into advancements into the cathode side of the lithium-ion battery.

“We are very excited to demonstrate a new electrolyte design for lithium-ion batteries that improves anode capacity by more than five times compared to traditional methods,” Dr Borodin said. “This is the next step needed to move this technology closer to commercialisation.”

Researchers are improving the long-term reliability of perovskite solar cells with a so-called...