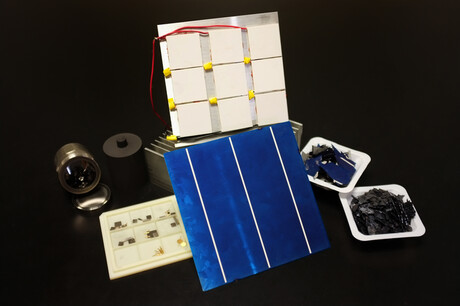 Scientists from the Agency for Science, Technology and Research (A*STAR) and Nanyang Technological University, Singapore (NTU Singapore) have developed technology that can turn old solar panels into a high-performance, energy-harvesting thermoelectric material that harvests heat and converts it into electricity. Their joint study has been published in the scientific journal Advanced Materials.

Solar panels are made up of solar cells, which contain a complex mix of various materials such as aluminium, copper, silver, lead, plastic and silicon. Separating such materials and recycling them each in a unique way is a complex and costly process; therefore, current recycling approaches mainly recover only the glass and metallic support structures from solar panels.

Silicon, which makes up 90% of solar cells, normally ends up in landfills. It is challenging to upcycle silicon as recycled silicon has impurities and defects, which cannot be used to create functional solar cells. This makes it difficult to recycle used silicon into solar cells or other silicon-based technologies.

The joint team turned this limitation into opportunity by developing technology to transform expired solar cells into enhanced thermoelectric material. Compared to solar cells, this technology capitalises on the contrasting properties of thermoelectrics, where the incorporation of impurities and defects serves to enhance rather than diminish their performance.

Scientists from A*STAR’s Institute of Materials Research and Engineering (IMRE) and Institute of High Performance Computing (IHPC), led by Dr Ady Suwardi, contributed their expertise in material properties and computational modelling, respectively, to determine the optimal composition of materials. Scientists from NTU’s Singapore-CEA Alliance for Research in Circular Economy (SCARCE), led by Associate Professor Nripan Mathews, leveraged their expertise in extracting valuable materials from solar waste to develop the technologies required for recovery of silicon from solar panel waste.

To impart thermoelectric characteristics such as power conversion and cooling efficiency to waste silicon and to enhance the performance of the upcycled silicon-based thermoelectrics, the team first pulverised solar cells into fine powder using ball milling technology. Next, phosphorus and germanium powder were added to alter their original properties before the powder combination was processed under high heat and temperature using spark plasma sintering.

After evaluating the electrical property of various combinations, the team achieved a sample offering the most optimised thermoelectric performance, with a thermoelectric figure of merit (zT) of 0.45 at 873 K — the highest amongst elemental silicon thermoelectrics. According to Suwardi, the study “demonstrates that thermoelectrics is a fertile ground for upcycling defect- and impurity-sensitive semiconductors”.

“Furthermore, this project demonstrates the concept of phononic engineering, an efficient and useful approach that offers full control of the thermal conductivity of solids,” said Dr Gang Zhang, senior scientist from IHPC.

Mathews added, “Advanced technologies to tackle the growing solar e-waste problem need to be urgently developed due to the massive scale of solar photovoltaics being installed worldwide. As a part of the SCARCE research centre supported by the National Environmental Agency (NEA), we are working on a variety of innovations that can turn trash to treasure, thus opening new economic growth areas for waste management and recycling.

“Leveraging our resource recovery techniques and in collaboration with A*STAR, we have proven that it can yield valuable materials that are of high quality and useful in the manufacturing of renewable energy components, which in this case is the development of a high-performance thermoelectric material that can harvest heat and turn it into electricity.”

The team will look to pilot the technology for large-scale upcycling of waste silicon, which can be used for high-temperature energy-harvesting applications such as converting heat generated from industrial waste processes into electricity.