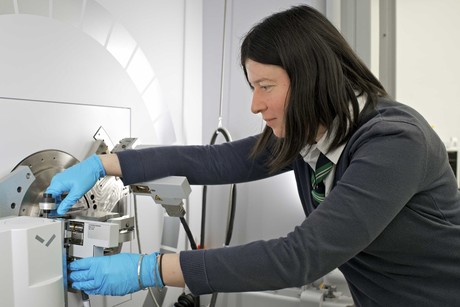 Swiss electrochemistry researchers have developed a method that could enable a breakthrough for the lithium-sulfur battery — a promising candidate for future energy storage devices.

Not only do lithium-sulfur batteries require materials that are inexpensive, environmentally friendly and readily available, they can theoretically deliver around three times as much energy as today’s conventional lithium-ion batteries. In practice, however, the lithium-sulfur battery has been found to rapidly lose capacity with repeated charging. Furthermore, present-day prototypes manage far fewer charging cycles than conventional lithium-ion batteries and deliver only a fraction of the theoretically possible energy.

Now, researchers at the Paul Scherrer Institute (PSI) have gained new insights into the processes responsible for the capacity loss by examining the chemical processes within the battery using a method known as operando X-ray diffraction. For the first time ever, they made directly visible the way lithium-sulfur compounds change and how this leads to the loss of capacity. They have published their results in the journal Nature Energy.

As part of the normal operation of a lithium-sulfur battery, so-called polysulfides form. Unfortunately, a portion of these will be lost to the battery’s liquid component and then travel back and forth between its two electrodes with every charging and discharging cycle — the researchers call this a ‘shuttle effect’. As a consequence, these rogue polysulfides react with the lithium electrode of the battery, thereby reducing the amount of available sulfur — the active material in the battery — and diminishing the battery’s capacity.

Ordinarily, liquids cannot be observed using X-ray diffraction, as the process only works on ordered, crystalline structures. “The polysulfides in the electrolyte, however, normally move around in a disordered fashion,” explained Joanna Conder, first author of the study.

To make the polysulfides visible, the researchers added glass fibres to the electrolyte. The polysulfides subsequently settled on the surface of the fibres in an orderly manner. “Aligned in this way, the polysulfides diffract the X-rays and thus become visible,” said Conder.

“This enabled us for the first time to track the accumulation and transformation of the polysulfides inside the battery during charge and discharge.”

Unexpectedly, the researchers found that the glass fibres reduced the unwanted accumulation of sulfides. Since glass consists mainly of quartz, the researchers decided to use quartz powder as a kind of cleaning agent in the batteries and observe the result.

“We simply added the quartz powder to the electrolyte — that is, the liquid component of the battery — like adding washing powder to the laundry,” said study co-author Claire Villevieille.

“We found that quartz binds the polysulfides the way soap binds dirt.”

Quartz powder was found to increase the available energy and curb the capacity loss that sets in over time, because the interior of the battery stays clean and functional for a longer time. Battery performance was improved by 25 to 30% and the reversibility of the discharging process also improved from around 80 to 90%, according to Villevieille.

The researchers noted that there are, in principle, other approaches by which polysulfides could be prevented from dissolving and contribute to limiting the battery function. “But these are either very complicated or very expensive or both, especially when the method needs to be implemented on an industrial scale,” said Conder.

“Quartz, in contrast, is just about the cheapest material there is.”