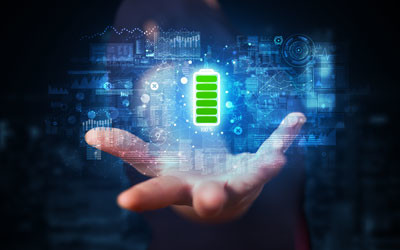 Smartphones represent the peak of portable electronic design, boasting computing power and memory capacity that matches the spec of desktop PCs from only a few years ago. But today’s smartphones have an Achilles heel: their batteries, which have struggled to maintain an energy density (Wh/kg) improvement of around 7% per year.

The original iPhone had a 620 MHz 32-bit processor with 128 MB RAM, 16 GB Flash and a 5.18 Wh battery, while today’s iPhone 6S sports a dual-core, 1.8 GHz, 64-bit processor, 2 GB RAM, 128 GB Flash and a 6.55 Wh cell. The electronics represent a dramatic leap in performance compared with the first model, while the battery energy density has improved by only around 26% in eight years.

According to Apple’s specs, the lithium-ion (Li-ion) battery in the iPhone 6S has a capacity of 1715 mAh and is capable of around 11 hours of internet browsing or video playback. It’s impressive, but not enough to stop travellers diving for the charger at the first sight of an airport terminal mains socket. So is a big leap in Li-ion battery technology around the corner, or does the technology represent only a waypoint on the journey to a power source offering far more time between recharges?

Lithium-based batteries are successful because they combine high capacity with low weight, resulting in more energy per kilogram than any other metal. During charging, lithium ions are energised and move from the LiCoO2 to the carbon. When the battery is in use the ions move back the other way, causing liberated electrons to travel in the opposite direction around the circuit to power the load.

However, a key weakness of Li-ion batteries is their fragility. Each time ions are shifted, some react with the electrodes and remain embedded in the material. Eventually the supply of free ions is depleted and the battery fails. Each charging cycle also causes some volumetric expansion of the electrodes, which stresses the structure and causes microscopic damage, diminishing its ability to ‘store’ ions. Consequently, Li-ion batteries can only be recharged a limited number of times. Moreover, overcharging can ‘force’ so many ions into the electrode that disintegration of the material can occur. It’s important to properly manage the charging and discharge rate of Li-ion batteries in portable devices using a power management IC.

Early versions of Li-ion batteries employed a liquid electrolyte to separate the electrodes, later using a porous separator soaked in an electrolytic gel. This allowed the batteries to have a sandwich construction, leading to the thin designs common to today’s mobile handsets. Further development led to lithium polymer (Li-poly) cells that used a solid polymer as the separator. One downside of Li-poly batteries is that the ions travel more slowly through the solid polymer than liquid electrolyte, so charging takes longer.

Scientists are now focused on enhancing Li-ion battery characteristics such as energy density, self-discharge rate, peak demand and pulse performance, charging time and tolerance to deep discharge, together with improving device safety. Developments have primarily targeted two areas: alternative materials for positive electrodes, negative electrodes and electrolytes — with a view to packing more lithium ions into the electrodes, making it easier for the ions to move in and out — and overcoming safety challenges.

There are also several initiatives for improving the mobility of the ions. One example from the University of Illinois at Chicago (UIC) replaces the thin, almost two-dimensional, positive and negative graphite electrodes of a conventional Li-ion battery with three-dimensional porous nickel structures. LiMnO2 and nickel tin (NiSn) are plated onto the structures to form the positive and negative electrodes. The result is electrodes that can hold many more lithium ions than a conventional device with greater freedom of movement. The university claims this battery would be 30 times smaller than a device of the same capacity and could be charged 1000 times quicker.

UIC is also doing some pioneering work replacing lithium ions (which carry a +1 charge) with magnesium ions (which have a +2 charge). The result could be a battery with a higher energy density than Li-ion cells that can withstand more recharging cycles.

Researchers have also looked to employ nanoscale (10 nm) materials to improve the mobility of lithium ions through electrodes and electrolytes. For example, scientists at Pohang University have built a prototype battery from pumpkin-shaped molecules organised in a honeycomb-like structure which can be used as a solid electrolyte. The molecules have a thin channel (75 nm in diameter) running through them which enables lithium ions to diffuse more freely than in a conventional electrolyte. In tests, the porous electrolyte demonstrated lithium ion conductivity of three times that of conventional commercial solid electrolytes.

Another example of nanomaterials at work comes from Massachusetts Institute of Technology (MIT). Researchers Byoungwoo Kang and Gerbrand Ceder claimed that by using nanoball electrodes, batteries could be charged about 100 times as fast as normal Li-ion batteries, resulting in a smartphone that could charge in 10 seconds. The 50 nm balls of lithium iron phosphate improved ion mobility and the researchers accelerated the process by coating the balls with a thin layer of lithium phosphate.

Carbon nanotubes might already be at work inside smartphone batteries, as they exhibit greater surface area, higher conductivity and better mechanical stability than bulk carbon. Other developments include eliminating the carbon altogether and replacing it with silicon or germanium nanowires to further increase the surface area of the negative electrode. This boosts the mobility of the lithium ions and allows more to be absorbed during charging without volumetrically stressing the material (enabling more recharge cycles).

‘Nanostructuring’ generally increases the surface area-to-volume ratio, which improves both energy and power density due to an increase in electrochemically active surface area and a reduction in ion transport lengths. The downside is an increase in side reactions between the electrode and the electrolyte, causing higher self-discharge, fewer recharging cycles and shorter shelf life. Prototype batteries using nanomaterials exhibit higher energy densities than today’s commercial batteries, but materials are expensive and the manufacturing process is difficult to scale to industrial levels.

The next generation of lithium battery

One development that brings together all the strands of current Li-ion battery development is the lithium-sulfur (Li-S) battery. This device takes advantage of developments in materials, ‘three-dimensional’ electrodes and nanomaterials to improve on today’s Li-ion products. Current developments target electric vehicles, but the hope is the technology can be shrunk for use in portable products like smartphones.

The negative electrode is a thin sliver of lithium while the cathode is lithium oxide (Li2O2) in contact with active sulfur. The reason for such interest in the technology is the predicted maximum energy density. The best contemporary Li-ion batteries produce about 200 Wh/kg and the technology has a theoretical limit of around 320 Wh/kg. The theoretical limit for Li-S is around 500 Wh/kg. The advantage is that the sulfur can ‘host’ two lithium ions compared to the 0.5 to 0.7 for conventional intercalation materials — resulting in superior energy density.

Fuel cells, meanwhile, have long been used as a method of converting the chemical energy of fuel into electricity, and are considered a good option for electric vehicles. However, due to their size portable fuel cells are inappropriate for mobile electronic products at this time.

Li-ion batteries lie at the heart of the most portable consumer electronic devices — but while providing satisfactory service, consumers crave longer life from their batteries, stimulating ongoing research. Some of that research promises to yield lithium-based batteries with double the runtime of existing cells — but even that might not be enough to satisfy the demands of consumer products, so expect to see alternative technologies enter the fray in the near future.

*Steven Keeping is a contributing writer for Mouser Electronics and gained a BEng (Hons) degree at Brighton University, UK. He is based in Sydney.