The teeth of a marine snail found off the coast of California are being used to create less costly and more efficient nanoscale materials to improve solar cells and lithium-ion batteries.

The gumboot chiton, the largest type of chiton, which can be up to a foot-long, are found along the shores of the Pacific Ocean from central California to Alaska. They have a leathery upper skin, which is usually reddish-brown and occasionally orange, leading some to give it the nickname ‘wandering meatloaf’. 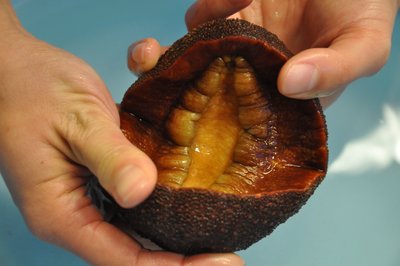 The underside of a gumboot chiton in the lab of David Kisailus.

Over time, chitons have evolved to eat algae growing on and within rocks using a specialised rasping organ called a radula, a conveyer belt-like structure in the mouth that contains 70 to 80 parallel rows of teeth. During the feeding process, the first few rows of the teeth are used to grind rock to get to the algae. They become worn, but new teeth are continuously produced and enter the ‘wear zone’ at the same rate as teeth are shed. 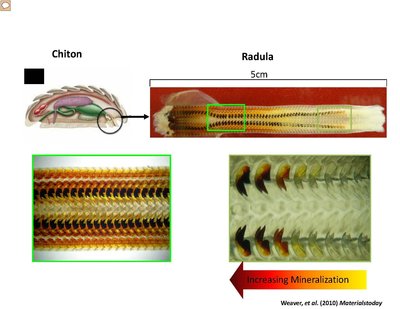 David Kisailus, an assistant professor of chemical and environmental engineering at the University of California, Riverside’s Bourns College of Engineering, who uses nature as inspiration to design next-generation engineering products and materials, started studying chitons five years ago because he was interested in abrasion- and impact-resistant materials. He has previously determined that the chiton teeth contain the hardest biomineral known on Earth, magnetite, which is the key mineral that not only makes the tooth hard, but also magnetic.

In the paper ‘Phase transformations and structural developments in the radular teeth of Cryptochiton stelleri’, Kisailus set out to determine how the hard and magnetic outer region of the tooth forms.

His work revealed this occurs in three steps. Initially, hydrated iron oxide (ferrihydrite) crystals nucleate on a fibre-like chitinous (complex sugar) organic template. These nanocrystalline ferrihydrite particles convert to a magnetic iron oxide (magnetite) through a solid-state transformation. Finally, the magnetite particles grow along these organic fibres, yielding parallel rods within the mature teeth that make them so hard and tough.

“Incredibly, all of this occurs at room temperature and under environmentally benign conditions,” Kisailus said. “This makes it appealing to utilise similar strategies to make nanomaterials in a cost-effective manner.”

While Kisailus is focused on solar cells and lithium-ion batteries, the same techniques could be used to develop everything from materials for car and airplane frames to abrasion-resistant clothing. In addition, understanding the formation and properties of the chiton teeth could help to create better design parameters for better oil drills and dental drill bits.

Kisailus’s most recent findings detailing how the teeth of chiton grow has been published in the journal Advanced Functional Materials. Co-authors of the paper were: Qianqian Wang, Michiko Nemoto, Dongsheng Li, Garrett W Milliron, Brian Weden, Leslie R Wood, all of whom are current or former undergraduate and graduate students at UC Riverside; James C Weaver, a former post-doc of Kisailus, now at Harvard University; John Stegemeier and Christopher S Kim, of Chapman University; and Elaine DiMasi, of Brookhaven National Laboratory.

Could dual-ion batteries be a game changer for EVs?

Dual-ion batteries are emerging as one of the promising technologies for sustainable energy...

The fabric is an energy-harvesting device that turns vibrations produced from the smallest body...

Turmeric extract could be key to greener fuel cells

Researchers combined curcumin and gold nanoparticles to create an electrode that requires 100...

Beefing up cyber defences during EOFY

Stop the blame game on the tech skills shortage