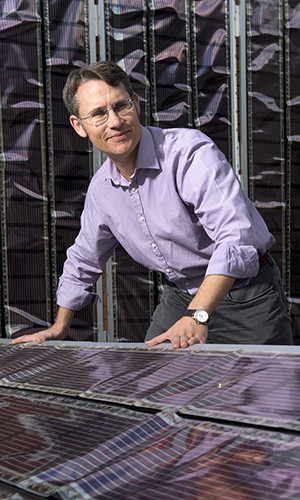 The University of Newcastle (UON) has officially unveiled its 100 m2 printed solar demonstration site, said to be the first in Australia and the third of its size in the world.

Invented at UON by Professor Paul Dastoor and his team, printed solar material is made by printing electronic ink onto paper-thin, clear laminated sheets using conventional printing presses. At a production cost of less than $10/m2, the technology is said to deliver unprecedented affordability.

“On the back of five years of in-house development, all of the components of these advanced electronic inks are now synthesised at scale within our Centre for Organic Electronics using non-toxic carbon-based materials,” explained Professor Dastoor. “These components are then used directly or further processed into water-based inks and paints.”

Professor Dastoor said that, unlike traditional PV panels, the technology maintains a constant power flow in low light and cloud cover. He said, “Our printed solar solution continues to function consistently in low light and under cloud cover, which means that users don’t experience dips in productivity.”

The material is so sensitive that it can even produce small quantities of energy from moonlight. Furthermore, the film is so light that it is tethered to the roof and walls of the demonstration site by Velcro strips. Rollout is exactly that — ‘rolling out’ a long sheet of the laminated material.

“Because it is light and can be printed quickly, it is … ideal for disaster relief and recovery applications supporting displaced people and powering temporary emergency bases,” said Professor Dastoor. “The material can be safely airdropped and very easily installed.

“It could be ideal for forward operating bases and special operations as it is lightweight — the lightest energy generation technology by kilo that exists, and produces no noise.

“The material could also be used as sails for yachts and on ship decks.”

Professor Dastoor added that the university’s lab-scale printer can be used to produce “hundreds of metres of material per day” — on a commercial-scale printer, he said, this would increase to kilometres.

“If you had just 10 of these printers operating around the clock we could print enough material to deliver power to 1000 homes per day,” he said.

Initially, the electrical output of the demonstration site is being used for scientific study, allowing researchers to monitor how large areas of the printed solar cells respond under different real-world conditions.

“It will help to determine the lifespan of the material and provide half-hourly feedback on the performance of the system,” said Professor Dastoor.

Professor Dastoor has been invited to demonstrate his technology at printing tradeshow Pacprint at the Melbourne Convention and Exhibition Centre from 23–26 May. This will be the first ever public display of the technology.