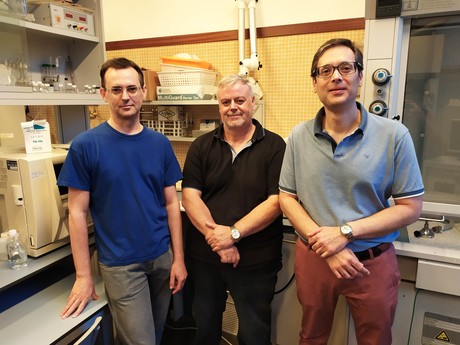 Researchers at Valencia’s Polytechnic University (UPV) have developed devices that store electric charge in textile materials, which could be used, for example, to charge our mobile phones. Described in the European Polymer Journal, these ‘supercondensers’ are placed on active carbon tissues that stand out due to their electric properties and high level of power.

The researchers, from UPV’s Electrocatalysis, Electrochemical Synthesis and Polymer Characterisation Group (GESEP), are focused on using textile materials as electrodes. In this case, the devices they have designed and tested make use of all the potential of active carbon, graphene and polyaniline, a polymer with high capabilities that is already broadly used in textile materials.

From their laboratories, the researchers have evaluated different strategies that enable the attainment of electric charge accumulators from the electrochemical reduction of graphene oxide on the surface of the activated carbon (reduced graphene oxide, or RGO) and the subsequent electrosynthesis of polyaniline.

“We have obtained new electric charge accumulators with specific power that are very competitive, and which could be used to charge the batteries of several devices,” said Francisco J Cases, Head of the GESEP. “The supercondensers have been developed on textile materials and therefore the volume/mass and surface/mass ratios are very high, hence their great potential. And as textile materials, these supercondensers could be small to supply energy to mobile devices, from our mobile phone to a tablet or laptop, to name a few examples.”

As well as their use in ‘intelligent’ textiles, the UPV researchers add that these new supercondensers have great potential as an alternative to lithium batteries or fuel cells.

“The tests we have conducted in the laboratories prove that our devices have a specific power that is very competitive,” Bonastre said. “In the case of fuel cells, they range from 2 to 200 W/kg, and in the case of lithium batteries, from 100 to 600. Our active carbon, polyaniline and graphene supercondensers reach powers of 500 W/kg.”

They could also be used to treat wastewater by way of electrolysis, as well as in biomedical settings. According to Cases, “In the former case, we have used it for the decolouring of textile wastewater, with very promising preliminary results.”

The work of the GESEP now focuses on developing prototypes that are able to decontaminate greater volumes of industrial wastewater, using these textile materials as electrodes in an electrochemical system.