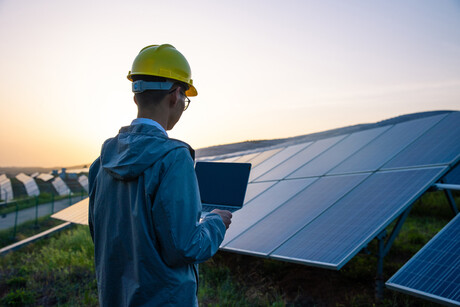 An electronic mismatch in the pairs of materials used to make organic solar cells can enhance cell operation, according to researchers from the King Abdullah University of Science and Technology (KAUST). The research finding — made following a reanalysis of organic solar materials and published in Advanced Materials — should enable researchers to predict new organic formulations with strong solar cell performance.

The light-capturing layer of organic solar cells typically comprises a two-component mixture called a donor–acceptor blend. In sunlight, the incoming energy can excite electrons to jump between different energy levels in the blend, suggesting that the energy level alignment between the donor and the acceptor component should be key to device performance. However, different research groups have used different methods to measure energy levels and have produced contradictory results on the effect of energy level alignment.

Anirudh Sharma, a post-doctorate student in Derya Baran’s lab, who led the work, said the researchers wanted to understand the origin of this contradictory understanding. “This motivated us to study the energy levels of organic solar cell materials using different methods to establish meaningful material–property relationships,” Sharma said.

After establishing the best methods for the measurement, researchers analysed energy level alignment in 12 donor–acceptor organic solar cell blends. The results showed — contrary to current belief — that blends with little to no difference in one energy level metric, known as the ionisation energy, were poor performers. The best performing organic solar cells had a significant difference in ionisation energy between the donor and the acceptor component in the blend.

“We were not surprised that our proposal for a new type of energy level measurement would be more reliable, but we were surprised that our hypothesis revealed that what is commonly believed in literature is actually not true. This method has huge potential to reveal new donor–acceptor pair systems that could work well in organic solar cells and would also highlight which pairs won’t work,” Baran said.

Sharma said that the significance of the results extends beyond solar research. “The implications of this study are relevant for a larger field of organic electronics in general.”

A team of researchers from Lithuania have synthesised the materials that were used for...