Are we running out of lithium-ion battery materials? 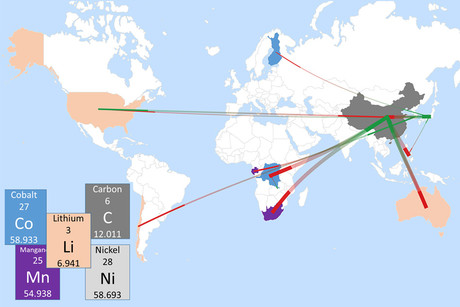 US researchers have sent out their assurance that the key materials that make up lithium-ion batteries are likely to have sufficient supply to meet the anticipated long-term demand — so long as we start planning now.

The dramatic rise in production of electric vehicles, coupled with expected growth in the use of grid-connected battery systems for storing electricity from renewable sources, raises a crucial question: are there enough raw materials to enable increased production of lithium-ion batteries, the dominant type of rechargeable batteries on the market? Researchers from Massachusetts Institute of Technology (MIT), the University of California, Berkeley and the Rochester Institute of Technology decided to analyse the lithium-ion battery supply chain in order to find out.

“The theme that we see with material availability is there’s often concern about whether there is enough x to meet new demand in y,” said Elsa Olivetti, a materials scientist at the MIT and first author on the study. “You end up with a lot of hype without thoughtful care about where the challenges are, so let’s panic where it’s appropriate.”

Like all batteries, lithium-ion batteries consist of an anode (typically graphite), a cathode (typically oxides of lithium, cobalt, nickel and/or manganese) and a liquid electrolyte to transport the charge (a solution of lithium and other ions). Based on publicly available data, the researchers assessed the availability of each of these elements, with other key ingredients such as copper, aluminium and some polymers considered abundant enough that they are not likely to be a limiting factor. The results were published in the journal Joule.

It quickly became clear to the researchers that nickel and manganese are used much more widely in other industries than battery production, so even a significant increase in lithium-ion battery demand is not likely to impact supply. Demand for lithium is more of a concern, though this can be mined from a variety of sources — including rock and sea brine — and is also abundant in several countries, including Australia, Chile and Argentina.

The researchers concluded that there are two main pathways to production of lithium: mining and processing of brines. Of those, production from brine can be ramped up to meet demand much more rapidly, within as little as six or eight months, compared to bringing a new underground mine into production, according to Olivetti. Although there might still be disruptions in the supply of lithium, she said, these are unlikely to seriously disrupt battery production.

As for cobalt, this is where things started to get complicated. Its major source is the Democratic Republic of the Congo, which has a history of violent conflict and corruption. Furthermore, cobalt is typically produced as a by-product of other mining activity, with Olivetti claiming the majority of a mine’s revenue often comes from nickel. And as it can be a very time-consuming process to wait for a new mine to open, we could very well face the situation where cobalt supplies exist but are simply unreachable.

Predicting that supply and demand for cobalt may become unbalanced by 2025, the researchers are trying to move towards cathode materials for lithium-ion batteries that are less cobalt-dependent.

Cobalt is so attractive for lithium-ion batteries because the element creates stable cathode materials, which non-cobalt-containing cathodes have been unable to achieve. However, recent studies have demonstrated that other cathode compounds with other metals, such as manganese, molybdenum, titanium or chromium, could act as substitutes.

Overall, the 15-year prediction found that there could potentially be some bottlenecks in the supply chain but no serious obstacles to meeting the rising demand. According to Olivetti, “It’s important for stakeholders to be aware of the bottlenecks”, as unanticipated supply disruptions could put some companies out of business. Companies therefore need to think about alternative sources and “know where and when to panic”.

A webinar related to the paper will be presented on 26 October at 3 am AEDT, which will see Olivetti joined by Sam Jaffe from Cairn Energy Research Advisors and Wei Tong from the Lawrence Berkeley National Laboratory. To register for the webinar, click here.

Image caption: This map shows today’s trade flows of key ingredients for battery production, with exports from each country shown in red and imports in green. Image courtesy of the researchers under CC BY-NC-ND 3.0