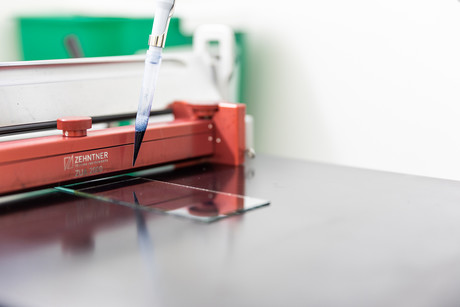 Adding a third ingredient to the light-capturing layer of an emerging solar cell technology can significantly improve all aspects of its energy-harvesting performance, according to researchers from King Abdullah University of Science and Technology (KAUST).

There have recently been significant gains in performance of organic solar cells — an alternative to silicon solar technology — due to a rethink of their formulation. Typically, the cells consist of two light-capturing molecules — one an electron donor and the other an electron acceptor — which help draw apart the electric charges generated when light strikes the material. Early organic solar cells used molecules called fullerenes as the electron acceptor, but these materials had reached a performance plateau.

A more recent innovation is to add a small amount of a third component — either an additional electron acceptor or an additional electron donor — into the organic light-harvesting mixture. The third component can improve processability and produce a higher-quality, higher-performance light-harvesting layer. Alternatively, it can absorb light energy at wavelengths complementary to the other two components in the mixture.

Now Baran, Song and their collaborators have identified a third component that simultaneously improves both aspects of device performance, incorporating a second electron donor called BIT-4F-T into an organic solar material. This molecule was selected for several reasons, Song explained: its deep ionisation potential, which benefits the cell’s electronic properties; its complementary light absorption to harvest more light; and its high crystallinity, which improves processability.

Together, these enhancements boosted the solar cell’s performance by 15% compared with the two-component mixture, allowing it to reach an overall solar energy power-conversion efficiency of 14%. Cells containing BIT-4F-T also retained significantly more performance over time, the researchers wrote in the journal Joule.

The team next plans to investigate whether the three-component material can be produced using a manufacturing-friendly, large-scale coating technology while still maintaining stability, Song said. The researchers will also test the material in a tandem solar cell, coating the ternary organic mixture onto another solar material.

“From our simulation, the tandem configuration will push the efficiency over 17%” Song said. So while organic solar cells do not yet quite match the light-capturing efficiency of silicon cells, the three-component design brings them one step closer.