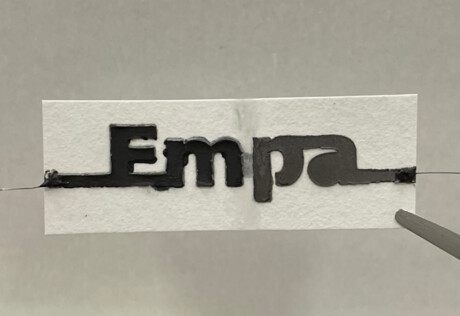 Researchers at the Swiss Federal Laboratories for Materials Science and Technology (Empa) have developed a water-activated disposable paper battery, presented in a proof-of-principle study in the journal Scientific Reports. The study authors suggest that their battery could be used to power a wide range of low-power, single-use disposable electronics — such as smart labels for tracking objects, environmental sensors and medical diagnostic devices — and minimise their environmental impact.

When a small amount of water is added, the salts within the paper dissolve and charged ions are released. These ions activate the battery by dispersing through the paper, resulting in zinc in the ink at the negative end of the battery releasing electrons. Attaching the wires to an electrical device closes the circuit so that electrons can be transferred from the negative end — via the graphite and carbon black-containing ink, wires and device — to the positive end (the graphite-containing ink) where they are transferred to oxygen in the surrounding air. These reactions generate an electrical current that can be used to power the device.

To demonstrate the ability of their battery to run low-power electronics, the authors combined two cells into one battery and used it to power an alarm clock with a liquid crystal display. Analysis of the performance of a one-cell battery revealed that after two drops of water were added, the battery activated within 20 seconds and, when not connected to an energy-consuming device, reached a stable voltage of 1.2 V; the voltage of a standard AA alkaline battery is 1.5 V. After one hour, the one-cell battery’s performance decreased significantly due to the paper drying. However, after two more drops of water were added, it maintained a stable operating voltage of 0.5 V for more than one additional hour.

The authors propose that the biodegradability of paper and zinc could enable their battery to minimise the environmental impact of disposable, low-power electronics. They suggest that the sustainability of the battery can be further increased by minimising the amount of zinc used within the ink, which also allows the amount of electricity the battery generates to be precisely controlled.

Image caption: Photograph of a stencil-printed two-cell paper battery with a design that spells the name of the authors’ research institution (Empa). The cells are separated by a water barrier (between the letters ‘m’ and ‘p’) and connected in series. Image credit: Alexandre Poulin/Empa.

A new piezoelectric vibration energy harvester has been developed that amplifies electric power...

US-based researchers from Ames National Laboratory have developed terahertz imaging for a new...

Researchers have created a phase heterojunction (PHJ) solar cell — a new kind of...