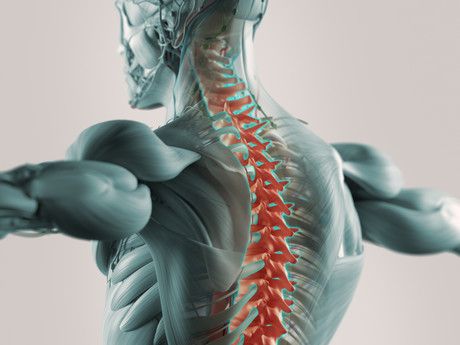 Researchers from Columbia University have developed a lithium-ion battery with impressive flexibility, high energy density and stable voltage, no matter how it is flexed or twisted. The secret to the battery’s success? It is shaped like the human spine.

With the rise of wearable electronics, demand has increased for high-performance flexible batteries. Up to now, however, researchers have had difficulty obtaining both good flexibility and high energy density concurrently in lithium-ion batteries. The prototype lithium-ion battery, developed by a team led by Assistant Professor Yuan Yang, seeks to address this challenge.

“We’ve developed a simple and scalable approach to fabricate a flexible spine-like lithium-ion battery that has excellent electrochemical and mechanical properties,” said Yang. “Our design is a very promising candidate as the first-generation, flexible, commercial lithium-ion battery.”

Yang was apparently inspired in his research by the suppleness of the spine while doing sit-ups in the gym. The human spine is highly flexible and distortable as well as mechanically robust, as it contains soft marrow components that interconnect hard vertebra parts.

Yang used the spine model to design a battery with a similar structure. His prototype has a thick, rigid segment that stores energy by winding the electrodes (‘vertebrae’) around a thin, flexible part (‘marrow’) that connects the vertebra-like stacks of electrodes together. His design thus provides excellent flexibility for the whole battery.

“As the volume of the rigid electrode part is significantly larger than the flexible interconnection, the energy density of such a flexible battery can be greater than 85% of a battery in standard commercial packaging,” Yang explained. “Because of the high proportion of the active materials in the whole structure, our spine-like battery shows very high energy density — higher than any other reports we are aware of. The battery also successfully survived a harsh dynamic mechanical load test because of our rational bio-inspired design.”

Yang’s team cut the conventional anode/separator/cathode/separator stacks into long strips with multiple ‘branches’ extending out 90 degrees from the ‘backbone’. Then they wrapped each branch around the backbone to form thick stacks for storing energy, like vertebrae in a spine. With this integrated design, the battery’s energy density is limited only by the longitudinal percentage of vertebra-like stacks compared to the whole length of the device, which can easily reach over 90%.

The battery shows stable capacity upon cycling, as well as a stable voltage profile no matter how it is flexed or twisted. After cycling, the team disassembled the battery to examine the morphology change of electrode materials. They found that the positive electrode was intact with no obvious cracking or peeling from the aluminium foil, confirming the mechanical stability of their design.

To further illustrate the flexibility of their design, the researchers continuously flexed or twisted the battery during discharge, finding that neither bending nor twisting interrupted the voltage curve. Even when the cell was continuously flexed and twisted during the whole discharge, the voltage profile remained. The battery in the flexed state was also cycled at higher current densities, and the capacity retention was quite high (84% at 3C, the charge in one-third of an hour). The battery also survived a continuous dynamic mechanical load test, rarely reported in earlier studies.

“Our spine-like design is much more mechanically robust than are conventional designs,” Yang said. “We anticipate that our bio-inspired, scalable method to fabricate flexible Li-ion batteries could greatly advance the commercialisation of flexible devices.”

The study has been published in the journal Advanced Materials. Yang and his team are currently optimising the battery’s design and improving its performance.