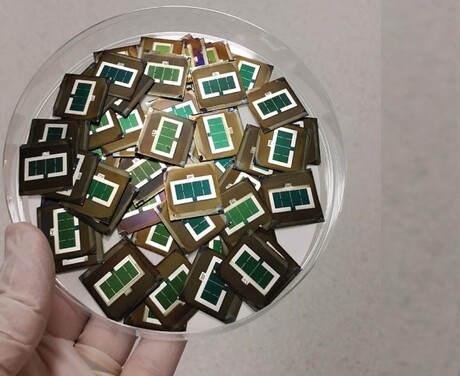 Flipping the structure of perovskite–silicon tandem solar cells can lead to dramatic gains in solar-cell performance, according to scientists from the King Abdullah University of Science and Technology (KAUST).

To enable the flipped cells’ high power-conversion efficiency, the team developed new materials to extract an electrical charge from the silicon side while maximising the amount of incoming light reaching the perovskite layer. Their breakthrough, published in the journal Energy & Environmental Science, opens multiple new avenues for further gains in tandem cell performance.

Erkan Aydin, a research scientist in De Wolf’s group, explained that when semiconductors such as silicon and perovskites absorb light, electrons are collected at ‘n-type contacts’ on one side of the material and positively charged holes are collected at ‘p-type contacts’ on the opposite side. In single-junction thin-film perovskite solar cells, the p-side usually faces uppermost, an arrangement known as the n-i-p structure. These cells recently exceeded efficiencies of 25%. “However, perovskite–silicon tandem solar cells are usually in opposite p-i-n polarity,” Aydin said.

Inspired by recent gains in n-i-p single-junction perovskite solar-cell performance, the group revisited n-i-p tandem cells in a bid to overcome the limitations that had previously hampered tandem solar cells with this structure. The key hurdles had been the lack of an efficient n-side contact material for efficient charge extraction and a sufficiently transparent p-side contact material to maximise the incoming sunlight reaching the light-harvesting layers in the device.

The team applied a transparent contact material, called spiro-TTB, and improved the performance of the n-side layers of the device by developing a niobium oxide-based contact material that was chemical bridged to the perovskite layer. “Overall, we allowed more light to be captured in the n-i-p tandem solar cell, and we converted the absorbed sunlight to energy more effectively thanks to our newly developed contacting materials,” Aydin said.

The team’s improved device achieved a power-conversion efficiency exceeding 27%, a significant improvement over the 21.8% efficiency of the previous best n-i-p tandem cell. De Wolf said, “Our agenda-setting results enable a new tandem device platform, from which we expect rapid progress to be achieved in the field of perovskite–silicon tandems in the n-i-p configuration.”