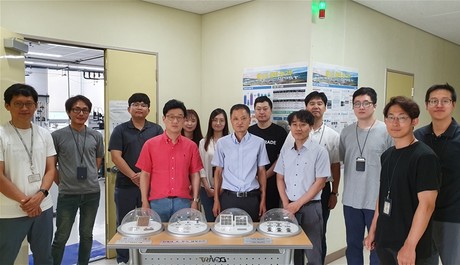 Researchers at Korea’s Daegu Gyeongbuk Institute of Science and Technology (DGIST) have achieved 11.4% photoelectric conversion efficiency in flexible CZTSSe thin-film solar cells — said to be the highest efficiency ever reached in such cells. The team’s breakthrough is expected to contribute to the development of future solar power technology and the next-generation thin-film solar cell industry.

Flexible thin-film solar cells, based on flexible substrate technology, can be applied in various fields such as wearable, building and automotive. Since CZTSSe thin-film solar cells use low-cost, ecofriendly materials, researchers throughout the world are keen to utilise them as the next generation of solar power technology. However, the photoelectric conversion efficiency of flexible CZTSSe solar cells had previously not exceeded 10%, due to technological issues such as the spread of impurities inside the flexible substrate and delamination.

The DGIST team managed to increase efficiency by changing the existing three-stack structure of the CZTSSe thin-film solar cell precursor into a multilayered structure and by improving the voltage characteristics and uniformity. Moreover, the use of applied process technology combated the issue of uniformity degradation.

“Our research achievement has presented ways to secure the uniformity of large-area process, which can cause issues in commercialisation,” said Dr Kee-Jeong Yang, who led the development of the process technology. “We will be able to advance the commercialisation of next-generation solar cells, which is applicable in various fields such as building outer walls.”

The result was that the team managed to achieve solar cells with efficiency of 11.4%, which has been officially recognised. Furthermore, the solar cells are easy to mass produce due to the use of low-cost, ecofriendly materials such as copper (Cu), zinc (Zn) and tin (Sn) — contrasting with existing thin-film solar cells (CIGS, CdTe, perovskite), which use high-cost heavy metal materials such as indium, lead and cadmium.