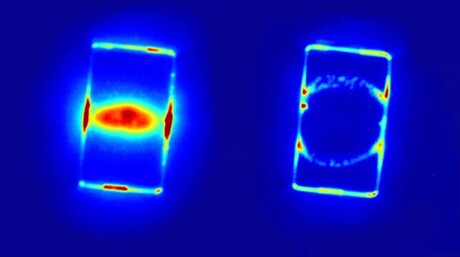 Metal halide perovskites, a class of hybrid organic–inorganic materials, provide a cheap, flexible and promising pathway for efficient solar photovoltaics, as well as light-emissive devices and fast X-ray detectors. However, since gaining prominence over the last decade, perovskite materials have presented scientists and engineers with several problems precluding their widespread use in commercial applications.

Among these is light-induced phase segregation, in which illumination, such as sunlight, disrupts the carefully arranged composition of elements within mixed-halide perovskites. This in turn leads to instability in the material’s bandgap, interfering with the wavelengths of light absorbed while reducing charge-carrier conduction and the efficiency of devices.

Now, members of the ARC Centre of Excellence in Exciton Science have shown that high-intensity light will undo the disruption caused by light at lower intensities, and that this approach can be used to actively control the material’s bandgap. Their research has been published in the journal Nature Materials.

Dr Chris Hall and Dr Wenxin Mao first noticed the potential to explore this avenue of investigation during a separate experiment. Dr Hall explained, “We were performing a measurement, looking for something else, and then we came across this process that at the time seemed quite strange. However, we quickly realised it was an important observation.”

They enlisted the help of Dr Stefano Bernardi, who led the computational modelling work to better understand their surprising solution to the issue. Dr Bernardi said, “What we found is that as you increase the excitation intensity, the local strains in the ionic lattice, which were the original cause of segregation, start to merge together. When this happens, the local deformations that drove segregation disappear.

“On a normal sunny day, the intensity is so low that these deformations are still localised. But if you find a way to increase the excitation above a certain threshold, for example by using a solar concentrator, then segregation disappears.”

The implications of the findings are significant, with researchers now able to retain the optimal composition of elements within mixed-halide perovskites when they are exposed to light, necessary for its use in solar cells.

“What we’ve shown is that you can actually use the material in the state that you want to use it, for a solar cell — all you need to do is focus more light onto it.”

“An exciting extension of this work is that the ability to rapidly switch the bandgap with light opens an interesting opportunity to use perovskites in data storage,” Dr Mao added.

Dr Hall concluded, “We’ve done the fundamental work and the next step is to put it into a device.”

Image caption: The fluorescent images were simultaneously recorded at two separate wavelength regions. The image on the left presents the fluorescence at 540–570 nm and the right one shows the fluorescence at 660–690 nm, which perfectly respond to the remixing phase emission at the centre with the segregated phase forming a ring-like emission. Image credit: ARC Centre of Excellence in Exciton Science.

Researchers have developed an economically viable system that can extract high-purity lithium...