Improving the performance of lithium–sulfur batteries 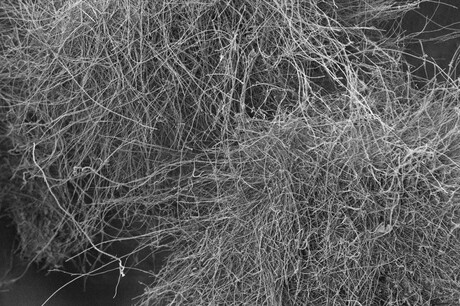 Researchers at Deakin University, in partnership with Australian start-up Li-S Energy, have developed an innovative lithium–sulfur (Li–S) battery that represents a step change in the global battery industry.

Li–S batteries have a significantly higher energy capacity than existing lithium-ion batteries. However, to date, they have a severe limitation with lifetime performance, typically degrading to the point of failure over very few charge and discharge cycles.

Deakin’s nanotechnology research team has developed an innovative use of the nanomaterial boron nitride nanotubes (BNNT) to improve the performance of Li–S batteries — retaining the high energy capacity and avoiding significant degradation over more than 450 charge and discharge cycles. 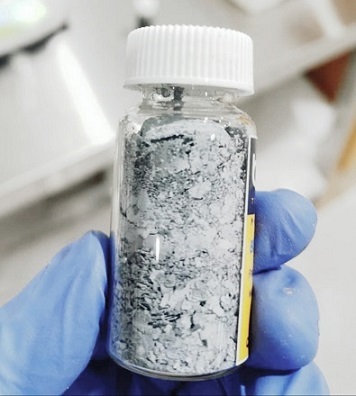 The team had to overcome three key challenges to creating a high-performance Li–S battery:

Each challenge involved significant aspects of innovation using BNNT and other integrated materials, which together facilitated the optimum functional relationship between lithium and sulfur in an energy storage device.

Li-S Energy has now lodged two key provisional patents covering the function of BNNT within the lithium–sulfur battery chemistry. The new technology covered by these patents has the potential to make large-scale manufacturing of Li–S batteries commercially viable for the first time.

Li-S Energy intends to optimise the design then scale up the production of the new batteries over the coming years, with almost unlimited potential uses — including the possibility of an electric car that only needs charging every 1000 km, a phone with a one-week battery life, off-grid solar/battery street lighting and drones with several hours of flight time. 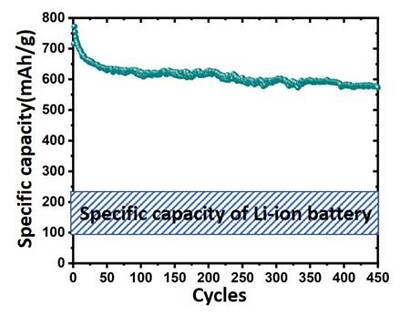 Li–S battery test results after 450 continuous cycles. Specific capacity has been maintained at greater than 550 mAh/g, which is in the region of three times the specific capacity of current lithium-ion batteries.

The research and initial production have been undertaken in Deakin’s advanced manufacturing precinct in Geelong, leveraging the expertise of Deakin’s Institute for Frontier Materials and the facilities of Deakin’s ManuFutures scale-up accelerator. The critical BNNT material is provided by another ManuFutures tenant, BNNT Technology, and Li-S Energy’s initial production plant is slated for Deakin’s new ManuFutures 2 facility, supported by the Victorian Government’s Higher Educational Strategic Infrastructure Fund.

Li-S Energy and BNNT Technology are both joint ventures between Deakin and the ASX-listed PPK Group. Li-S Energy has recently raised $20 million to support the ongoing development of this Deakin technology.

“We have achieved a significant innovation breakthrough with our Li–S battery technology at a time when the world is demanding better batteries and more efficient energy storage devices,” said Li-S Energy CEO Dr Lee Finniear. “The commercialisation journey for Li-S Energy Limited has begun and is on track to showcase this Australian company as a recognised leader in this exciting industry.”

The lead Deakin researchers, Alfred Deakin Professor Ying (Ian) Chen and Dr Baozhi Yu, added, “These results are the culmination of 10 years of research into the development of lithium–sulfur batteries and how that is influenced by advanced nanomaterials. The belief and investment in the research program from Li-S Energy have now enabled us to bring our research toward a commercial reality.”

Researchers have developed an economically viable system that can extract high-purity lithium...