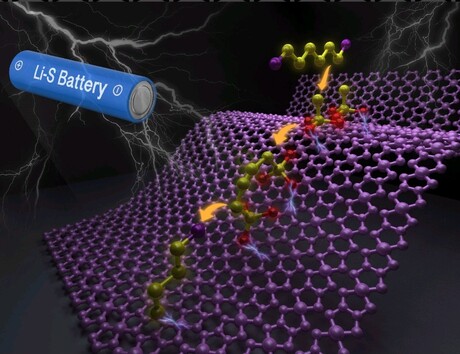 Researchers at South Korea’s Gwangju Institute of Science and Technology (GIST) have improved the performance and durability of lithium–sulfur batteries, which are attracting attention as a potential next-generation energy storage technology. The research team introduced cobalt oxalate as an electrochemical catalyst at the anode interface of a lithium–sulfur battery and succeeded in identifying the electrochemical catalyst reaction during the charging and discharging process.

Theoretically, lithium–sulfur batteries have five times more energy density than conventional lithium-ion batteries, as well as being economical and eco-friendly. They can be used for medium and large energy storage devices such as electric vehicles, as well as portable electronic devices and ultralight and ultrasmall special equipment. However, low life expectancy due to the non-conductive properties of sulfur and the elution of lithium polysulfides generated during the charging and discharging process act as a major obstacle to commercialisation.

Led by Professor Jaeyoung Lee, the GIST research team synthesised cobalt oxalate as an electrochemical oxidation/reduction catalyst using a very simple chemical precipitation method to produce gram units and applied it to the positive electrode of a lithium–sulfur battery. The results of their work were published in the journal ChemSusChem.

The cobalt oxalate electrochemical catalyst-based anodes were able to minimise the self-discharge generated by the lithium polysulfide moving inside the cell by absorbing the generated lithium polysulfide on the catalyst and the surface of the positive electrode. In addition, it was confirmed that cell performance continued without performance degradation due to self-discharge, even if the battery was left for about a week, at about 1.5 times the level of conventional lithium–sulfur batteries.

“The research results are most significant in securing capacity improvement and durability of lithium–sulfur batteries, which can implement high energy density at low cost through electrochemical catalyst reactions,” Prof Lee said. “Subsequent research is expected to contribute greatly to the development of next-generation energy storage technologies by gradually improving the durability of lithium–sulfur batteries.”

Tandem solar device collects light from the front and back

Two types of materials are better than one when it comes to solar cells, according to researchers...

Lowering the operating temperature of solar panels by just a few degrees can dramatically...