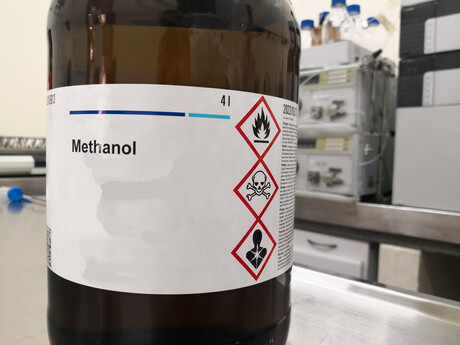 South Korean scientists have found a way to prevent undesired reactions in methanol fuel cells, which should help in the journey to phase out fossil fuels. Their research has been published in the journal ACS Applied Materials & Interfaces.

Scientists worldwide are focused on finding efficient alternatives to fossil fuels — but although high hopes have been placed on hydrogen fuel cells, the reality is that transporting, storing and using pure hydrogen comes with a huge added cost, making this process challenging with current technology. In contrast, methanol does not require cold storage, has a higher energy density and is easier and safer to transport. Thus, a transition into a methanol-based economy is a more realistic goal.

However, producing electricity from methanol at room temperature requires a direct methanol fuel cell (DMFC); a device that, so far, offers subpar performance. One of the main problems in DMFCs is the undesired ‘methanol oxidation’ reaction, which occurs during ‘methanol crossover’; that is, when it passes from the anode to the cathode. This reaction results in the degradation of the platinum (Pt) catalyst that is essential for the cell’s operation. Although certain strategies to mitigate this problem have been proposed, so far none has been good enough owing to cost or stability issues.

Now researchers from Incheon National University have come up with a creative and effective solution to this problem, using a relatively simple procedure to fabricate a catalyst made of Pt nanoparticles encapsulated within a carbon shell. This shell forms an almost impenetrable carbon network with small openings caused by nitrogen defects. While oxygen, one of the main reactants in DMFCs, can reach the Pt catalyst through these ‘holes’, methanol molecules are too big to pass through.

“The carbon shell acts as a molecular sieve and provides selectivity toward the desired reactants, which can actually reach the catalyst sites,” said study leader Professor Oh Joong Kwon. “This prevents the undesirable reaction of the Pt cores.”

The scientists conducted various types of experiments to characterise the overall structure and composition of the prepared catalyst and proved that oxygen could make it through the carbon shell and methanol could not. They also found a straightforward way to tune the number of defects in the shell by simply changing the temperature during a heat treatment step. In subsequent experimental comparisons, their novel shelled catalyst outperformed commercial Pt catalysts and also offered much higher stability.

“DMFCs have a higher energy density than lithium-ion batteries and could therefore become alternative power sources for portable devices, such as laptops and smartphones,” Prof Kwon concluded.