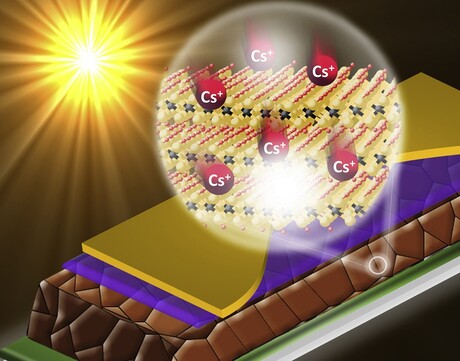 Australian and Swiss researchers have modified a nanomaterial to make perovskite solar cells as efficient as silicon-based cells, without their high cost and complex manufacturing.

“Silicon-based solar cells remain the dominant first-generation product, making up 90% of the market, but demand was high for cells that could be manufactured without their high prices and complexity,” Prof Shapter said.

“Among the next-generation technologies, perovskite solar cells (PSCs) have attracted enormous attention because of their high efficiency and ease of fabrication.

“But the new generation of solar cells still have some drawbacks, such as poor long-term stability, lead toxicity and high material costs.”

Prof Shapter said his team studied a nanomaterial that showed great promise in overcoming some of the new cell’s drawbacks, and used doping to modify the nanomaterial to enhance the cell’s electrical properties. The researchers found that the efficiency and thermal stability of the doped cells significantly outperformed those that were not doped.

“The PSCs that had doped cells showed a remarkable solar conversion efficiency that exceeded 21%,” Prof Shapter said. In comparison, the average silicon cell efficiency currently sits between 15 and 22%.

Associate Professor Yun Wang from Griffith University contributed modelling to understand the interaction between doped cell layers and materials used in light absorption. He said, “Our results explain how doped cells can greatly improve the energy conversion efficiency and lifetime of solar cells observed from the AIBN experiments.”

Prof Shapter said the team’s research is part of a global push towards advanced and sustainable solar cell technology, and contributes to “intensive efforts to develop various types of solar cells with the aim of realising efficient, stable and low-cost replacements for present silicon-based technology”.

Image courtesy of the study authors under CC BY-NC-ND 4.0