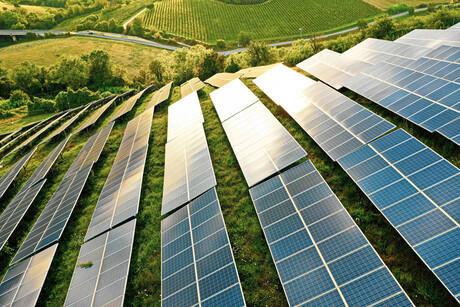 While a sunny, cloudless day might seem like the optimal setting for solar cells, too much sun and too much heat can actually reduce the efficiency of photovoltaics. As operating temperature rises by 1°C, traditional silicon-based solar cells will lose about 0.5% efficiency. In a typical photovoltaic plant, where modules operate nearly 25°C above the ambient temperature, energy losses can reach 12%. This necessitates effective cooling measures for solar farms. In the Journal of Renewable and Sustainable Energy, researchers from Portland State University, the University of Utah, and the National Renewable Energy Laboratory explored how to exploit the geometry of solar farms to enhance natural cooling mechanisms.

Some modern cooling methods force wind or water to interact with solar panel surfaces, while others employ specific materials with less thermal sensitivity. However, these techniques require significant resources to operate. In contrast, a solar farm with optimally spaced panels facing the correct direction could cool itself through convection using the surrounding wind. The researchers improved models that calculate how much energy a given solar plant will produce based on factors such as material, environmental conditions and panel temperature. They specifically focused on the geometry of solar farms, or how much ‘gappy-ness’ was present between the panels.

Author Sarah Smith, of Portland State University, said the researchers hypothesised that the most precise estimate of solar plant convection, and ultimately production efficiency, must consider the farm as a whole and all possible configuration changes. By design, it is rare that any two solar plants have the same get-up. Each is uniquely designed to optimise solar irradiance and conform to its surrounding environment. For example, the tilt of solar panels changes with latitude and their height varies with vegetation. Spacing of rows often depends on how much land is available. “This means that the heat-removing wind flow will also move differently throughout each solar plant based on its arrangement, ultimately changing how efficiently heat is removed from module surfaces,” Smith said.

The researchers performed wind tunnel experiments and high resolution simulations and collected real-world data to corroborate their model. They investigated photovoltaic heating and cooling with variations in module height, row spacing, angle and wind. Raising the height of solar cells and increasing the spacing between panel rows increased power output by 2 to 3%. According to Smith, this correlation between geometry and efficiency is a step towards predicting convective cooling for solar farms based on their inherently unique arrangements. “It paves the way for more accurate energy generation and cost prediction models in industry,” Smith said.