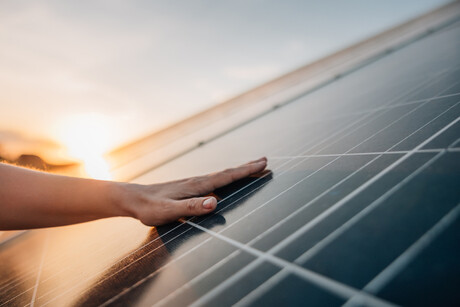 A group of chemists from Kaunas University of Technology (KTU) in Lithuania have proposed a solution to increase the stability and performance of perovskite solar elements. The chemists synthesised a new class of carbazole-based cross-linkable materials, which are resistant to various environmental effects, including strong solvents used in the production of solar cells. When applied as hole transporting layers, the materials developed at KTU labs helped achieve the 16.9% efficiency of the inverted-architecture perovskite cells at the first attempt. It is expected to reach higher efficiency upon optimisation.

Organic-inorganic hybrid perovskite solar cells have attracted attention as an alternative to conventional silicon-based solar technologies. They are cheaper, more flexible and have higher power conversion efficacy. Scientists are working to solve challenges related to improving the stability and other features of the perovskite solar elements. These layered, new generational solar cells can have two architectonic structures — regular (n-i-p) and inverted (p-i-n) structures. In the latter, the hole transporting materials are deposited under the perovskite absorber layer.

Professor Vytautas Getautis, chief researcher at the KTU Faculty of Chemical Technology, said that although p-i-n cells have numerous advantages when compared to the perovskite solar cells of regular architecture, they also have some shortcomings. “For instance, the hole transporting compounds should be able to withstand the strong polar solvents used to form a light-absorbing perovskite layer, which is placed above,” Getautis said.

To solve this problem, in p-i-n architectures polymers are often used as hole transporting materials. However, due to solubility issues, a polymer layer is not easy to form; it is also difficult to control the recurrence of reactions and synthesise the same structure. To solve this issue, KTU researchers made a hole transporting layer of carbazole-based molecules, which was then thermally polymerised in situ to reach cross-linking effect.

PhD student Šarūnė Daškevičiūtė-Gegužienė said the cross-linked polymer has a three-dimensional structure and is very resistant to various effects, including the strong solvents used while forming a light-absorbing perovskite layer. “We used several groups of molecules and developed materials, which, while used as a hole transporting layer, can improve the efficiency of an inverted perovskite solar cell to almost 17%,” said Daškevičiūtė-Gegužienė, who synthesised these compounds.

The above-described invention was featured as a cover article in Chemical Communications, published by the Royal Society of Chemistry, UK. The research group headed by Getautis has developed numerous cutting-edge inventions to improve the efficiency of solar cells. Among them are synthesised compounds, which self-assemble into a molecule-thin layer that acts as a hole transporting material. The silicone-perovskite tandem solar produced using the said materials reached an efficiency of over 29%. According to Getautis, the latter tandem combination could become the commercially available alternative to silicone-based solar cells, as it is more efficient and cheaper.

“Our field of research aims to improve the existing technologies for perovskite solar elements and in this field, we have achieved the best results with the self-assembling-monolayer technology. However, science is often developed in multiple directions, as we need to explore ways to use solar energy the best we can,” Getautis said.

Although perovskite cells are a novelty compared to silicone-based solar technologies, there are several companies that have commercialised different products based on perovskite technology. Among them are flexible semi-transparent interior elements, wearable electronics to control the wildlife population and various architectural solutions. According to Getautis, of all renewables, solar energy has the greatest potential and is the least exploited. However, this field is developing exponentially and it is estimated that by 2050, around half of the electricity used on earth will be produced from solar energy.

“Solar energy is entirely green — it is pollution-free, and the installed solar farms don’t require much maintenance. Keeping in mind current events, and the energy crisis, more and more people are interested in installing solar power plants in their homes or owning a share of a solar farm. It is a future of energy,” Getautis said.

A new piezoelectric vibration energy harvester has been developed that amplifies electric power...

US-based researchers from Ames National Laboratory have developed terahertz imaging for a new...

Researchers have created a phase heterojunction (PHJ) solar cell — a new kind of...