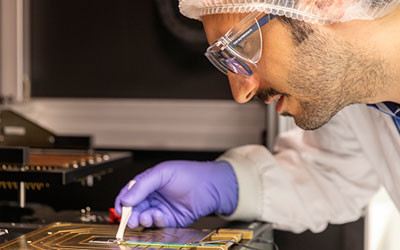 Researchers from the King Abdullah University of Science and Technology (KAUST) have developed transparent conductive films that let through a broader range of the solar spectrum and are set to increase the power conversion efficiency of perovskite-based multijunction solar cells beyond 30%. Their work has been published in the journal Advanced Functional Materials.

Performance of perovskite-based tandem solar cells rests on the ability of the top cell to harvest the blue portion of the solar spectrum while letting through the near-infrared light. Conversely, the bottom cell only needs to absorb near-infrared light. As explained by study lead Stefaan De Wolf, from the KAUST Solar Center, “The semitransparency of the top cell depends on the optical bandgap and thickness of the perovskite thin film as well as the characteristics of the transparent electrodes, especially their sun-exposed side.”

Ideal transparent electrodes exhibit high conductivity and broadband transparency, which reduces energy losses and enhances device performance through the entire solar spectrum. Indium tin oxide is the go-to transparent conductive material for solar cells, but its conductivity–transparency trade-off is not ideal. This trade-off is manifest through only moderate electron mobility and parasitic absorption — a phenomenon that competes with the light absorption responsible for current generation. Metals, such as titanium and molybdenum, have been used as dopants for indium-oxide-based electrodes to improve this trade-off, but their elevated processing temperatures make them unsuitable for perovskite-based tandem cells.

Unlike their zirconium-free counterparts, the initially amorphous IZRO films formed large crystals when heated to 200°C for 25 min under ambient conditions, suggesting that zirconium doping promotes crystallinity. The annealed films presented higher transparency and conductivity than their untreated precursors, which directly connects crystallinity with electrode performance.

When incorporated in perovskite-silicon tandem cells, the IZRO electrodes enhanced the response of the bottom cell compared to their conventional counterparts. This increased the power conversion efficiency from 23.3 to 26.2% — described by Aydin as “a remarkable improvement for mechanically stacked tandem solar cells”.

The team is now working on further implementing such electrodes in monolithically connected cells and improving the device performance by optimising optical design.

Image caption: Erkan Aydin is part of the KAUST team working on transparent conductive films that let through a broader range of the solar spectrum to improve the efficiency of new types of solar devices. Image ©2019 KAUST