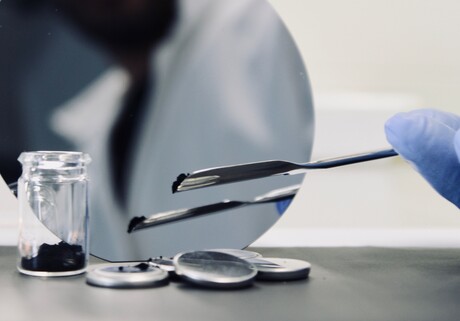 Researchers from Germany’s Karlsruhe Institute of Technology (KIT) have revealed what they believe to be a highly promising anode material for future high-performance batteries — lithium lanthanum titanate with a perovskite crystal structure (LLTO). As reported in the journal Nature Communications, LLTO can improve the energy density, power density, charging rate, safety and cycle life of batteries without requiring a decrease of the particle size from micro to nano scale.

As the demand for electric vehicles continues to grow, these and other mobile and stationary technologies require batteries that can store as much energy as possible in the smallest possible space with the lowest possible weight. While lithium-ion batteries still meet this requirement best, the new research aims at improving the energy density, power density, safety and cycle life of these batteries.

Anodes of lithium-ion batteries consist of a current collector and an active material applied to it that stores energy in the form of chemical bonds. In most cases, graphite is used as the active material; however, negative electrodes made of graphite have a low charging rate and are associated with safety issues. Among the alternative active materials, lithium titanate oxide (LTO) has already been commercialised. Negative electrodes with LTO present a higher charging rate and are considered to be safer than those made of graphite, but lithium-ion batteries with LTO tend to have a lower energy density.

A team led by KIT’s Professor Helmut Ehrenberg has now investigated another highly promising anode material: LLTO. Their study, which was carried out in collaboration with scientists from Jilin University and other research institutes in China and Singapore, found that LLTO anodes have a lower electrode potential compared to commercialised LTO anodes, which allows for a higher cell voltage and a higher capacity.

“Cell voltage and storage capacity ultimately determine the energy density of a battery,” Prof Ehrenberg said. “In the future, LLTO anodes might be used to build particularly safe high-performance cells with a long cycle life.”

Besides energy density, power density, safety and cycle life, the charging rate is another determining factor for the suitability of a battery for demanding applications. In principle, the maximum discharge current and the minimum charging time depend on the ion and electron transport both within the solid body and at the interfaces between the electrode and electrolyte materials. To improve the charging rate, it is common practice to reduce the particle size of the electrode material from micro to nano scale.

The KIT study shows that even particles of a few micrometres in size in LLTOs with a perovskite structure feature a higher power density and a better charging rate than LTO nanoparticles. The team attributes this to the so-called pseudocapacitance of LLTO: not only are individual electrons attached to this anode material, but also charged ions, which are bound by weak forces and can reversibly transfer charges to the anode.