Researchers develop batteries that use water as an electrolyte 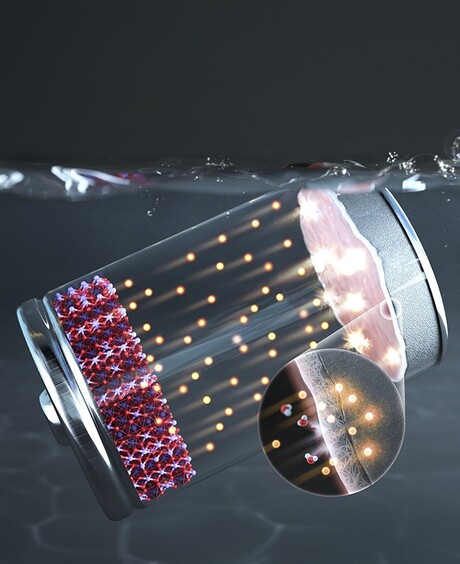 Researchers from the Department of Chemistry and the Division of Advanced Materials Science at POSTECH have developed a stable aqueous zinc-ion battery that uses water as an electrolyte. Lightweight, high-capacity lithium-ion batteries are widely used in mobile phones, laptops and other necessities. However, the organic electrolytes in conventional Li-ion batteries are flammable and can lead to fatal fires or explosions. Professor Soojin Park and Gyujin Song, along with PhD candidate Sangyeop Lee, employed a protective polymer layer in their zinc-ion battery to prevent electrode corrosion and increase the stability of the zinc anode, improving the electrochemical stability of the battery.

The organic-solvent-based electrolyte, which serves as a medium for ions to move inside the typical battery system, is inherently flammable, posing risk of explosion or fire. To address this issue, aqueous electrolyte batteries are being developed as promising replacements. However, the inferior reversibility of the zinc anode in aqueous electrolytes, which are caused by zinc dendrites and surface side reactions, has prevented zinc-ion batteries from being used.

The POSTECH researchers developed a zinc anode coated with a multifunctional protective layer by using a block polymer. This new polymer layer is elastic and stretchable and can ensure expansion during battery charging and discharging. The polymer protective layer is found to induce homogenised ion distribution and suppress dendritic growth, contributing to a long-term zinc anode lifespan. The thin film layer also improves the electrode stability by suppressing unnecessary chemical/electrochemical reactions in the electrolyte on the electrode surface.

Furthermore, the researchers revealed the movement of zinc ions in the coating layer by using time-of-flight secondary ion mass spectrometry (TOF-SIMS) analysis. Imaging the zinc ion movements, which was not successful in previous studies, could prompt further research on the surface properties of battery anodes. The research findings were published in Cell Reports Physical Science.