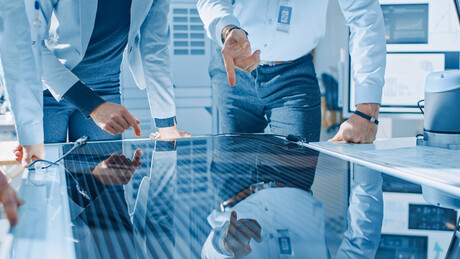 Organic solar cells, which make use of organic materials to convert sunlight into electricity, could be a good candidate for future photovoltaics, due to their light weight, flexibility, malleability and their high power conversion efficiency (PCE). Such qualities make them ideal for a range of applications. Despite their commercialisation potential, however, most OSCs are produced using a technique called ‘spin coating’, which allows for high PCEs but makes for poor scalability. OSCs with flexible electrodes use indium tin oxide (ITO), which makes them expensive and too fragile for large-area modules. If the commercial potential of OSCs is to be realised, they must overcome their dependence on ITO. Here, Dr Hongkyu Kang and Professor Kwanghee Lee from the Gwangju Institute of Science and Technology (GIST) have put forth a new method to create OSCs using zinc oxide (ZnO) that can overcome the issues of cost and scalability without compromising PCE.

The research findings were published in Volume 12, Issue 21 of Advanced Energy Materials. This research was the result of an industry–university collaboration, in which GIST developed the original technology in Korea and transferred it to MSWAY Co., Ltd., which had been dependent on foreign imports as the domestic production of ITO-based electrodes was impracticable. With the new technology, it is expected that a value chain will be established for the commercialisation of OSCs with construction and equipment companies, strengthening the value of industry–university joint research.

The researchers used sputtered ZnO and a ZnO nanoparticle layer obtained through a ‘blade coating’ technique to create a uniform bilayer on an ultrathin silver film electrode. Kang said that the ultrathin silver film electrode with ZnO bilayer has the flexibility, wettability and high surface energy of ITO but is not brittle or expensive. “This makes it easier to use ZnO for manufacturing organic solar cells and developing a printing technology for large-area solar cell technology,” Kang said.

The new ZnO bilayer-based OSCs demonstrated an efficiency of 7.67% for a module area of 528 cm2, making it among the most efficient large-area OSCs when compared to previous research. This was due to the reduction of ‘recombination’ of charge carriers in OSCs by the crystalline ZnO nanoparticles that, in turn, improved their open-circuit voltage (PCE). The creation of ITO-free OSCs with a large area and the same flexibility and efficiency as that of ITO-based OSCs could be a game changer for the future of solar cell technology. “Our method opens doors to the commercial use of these OSCs, such as their integration into building walls and windows to realise self-sustaining buildings,” Lee said.