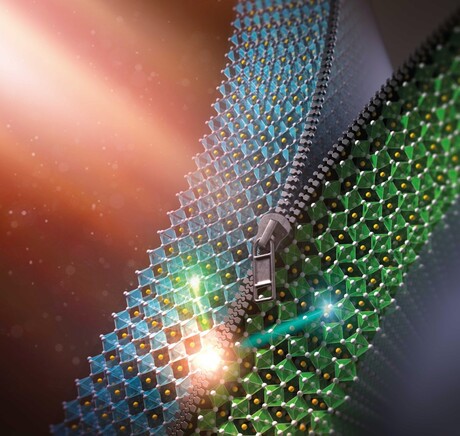 A group of researchers from the Integrated Center for Physics and Photonic Materials (IAPP) and the Center for Advancing Electronics Dresden at Technische Universität Dresden has demonstrated a novel concept for solar cells that exploits the ability of materials to exist in different crystalline phases. The research has been published in Nature Energy.

The purpose of a photovoltaic cell is to convert sunlight into electricity. By absorbing sunlight, pairs of charge carriers are generated and then need to be guided to the opposite sides of the photovoltaic diode to produce an electrical current. To facilitate this process, most solar cells include a heterojunction that provides a favourable energetic landscape to drive the charges to be separated. For example, silicon solar cells form a heterojunction by electrically doping each side of the device, forming a p–n junction. However, organic solar cells rely on blending different types of materials (donor and acceptor) to form a bulk heterojunction. These concepts are often not applicable to emerging classes of novel photovoltaic materials.

Professor Yana Vaynzof from the IAPP has shown a new concept for the formation of a heterojunction for photovoltaics. To do so, the researchers took advantage of the fact that materials can often exist in different structural configurations, termed crystalline phases. This phenomenon, called polymorphism, means that the same material can exhibit different properties, depending on the specific arrangements of atoms and molecules in its structure. By interfacing two such phases of the same material, Vaynzof demonstrated the formation of a phase heterojunction solar cell. The researchers chose a caesium lead iodide perovskite — a highly efficient solar cell absorber material — in the beta and gamma phases to realise their concept.

According to Vaynzof, the optical and electronic properties of caesium lead iodide in its beta and gamma phase are different from each other. “By placing a gamma-perovskite on top of the beta-perovskite we were able to fabricate a phase heterojunction solar cell that is significantly more efficient as compared to solar cells that are based on single phase perovskites,” Vaynzof said.

The researchers showed that the top layer of gamma-phase influences the performance of the solar cells in multiple ways. Ran Ji, the lead author of the study, said that even thin layers of gamma-perovskite led to a performance improvement due to the passivation of defects at the surface of the bottom layer. “Thicker layers of gamma-phase resulted in significant improvement in all of the photovoltaic performance parameters with the champion device reaching a power conversion efficiency of over 20%,” Ji said.

Advanced spectroscopic analysis revealed that this improvement in performance was associated with increased light absorption and the formation of an advantageous energetic alignment between the two phases. The researchers confirmed that the phase heterojunction remains stable during solar cell operation and even suppresses ion migration in the solar cell absorber, resolving a common problem for perovskite materials.

To realise the phase heterojunction concept, the scientists used two different fabrication processes for the top and bottom layers. This approach opens the path to the formation of other such structures in the future. “We hope that this novel concept combined with a simple fabrication route for phase heterojunctions will be applicable also to a variety of material systems in a range of electronic and optoelectronic devices,” Vaynzof said.

Since many semiconductor classes exhibit polymorphism, the concept could pave the way for new applications that operate based on phase heterojunctions that can be generated from a single material using simple and inexpensive fabrication processes.