Researchers from the Korea Advanced Institute of Science and Technology (KAIST) have developed a self-powered artificial cardiac pacemaker that is operated semi-permanently by a flexible piezoelectric nanogenerator.

The artificial cardiac pacemaker is widely acknowledged as medical equipment that is integrated into the human body to regulate the heartbeats through electrical stimulation to contract the cardiac muscles of people who suffer from arrhythmia. However, repeated surgeries to replace pacemaker batteries have exposed elderly patients to health risks such as infections or severe bleeding during operations.

The team’s newly designed nanogenerator directly stimulated a living rat’s heart using electrical energy converted from the small body movements of the rat. This technology could facilitate the use of self-powered flexible energy harvesters, not only prolonging the lifetime of cardiac pacemakers but also realising real-time heart monitoring. 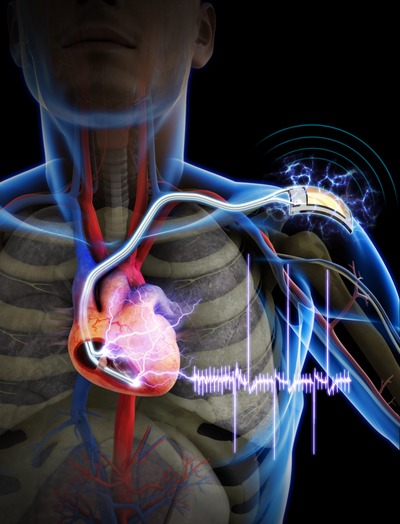 A self-powered cardiac pacemaker is enabled by a flexible piezoelectric energy harvester.

The research team, headed by Professor Keon Jae Lee of the Department of Materials Science and Engineering at KAIST and Professor Boyoung Joung, MD of the Division of Cardiology at Severance Hospital of Yonsei University, fabricated high-performance flexible nanogenerators utilising a bulk single-crystal PMN-PT thin film (iBULe photonics). The harvested energy reached up to 8.2 V and 0.22 mA by bending and pushing motions, which were high enough values to directly stimulate the rat’s heart.

“For clinical purposes, the current achievement will benefit the development of self-powered cardiac pacemakers as well as prevent heart attacks via the real-time diagnosis of heart arrhythmia. In addition, the flexible piezoelectric nanogenerator could also be utilised as an electrical source for various implantable medical devices.”

This research result was described in Advanced Materials.

4 reasons for disruptive technological change in the new norm

Safety at work: how can machine tools and systems operate safely and efficiently?

How to protect vital controller data from cyber attack