Tandem solar device collects light from the front and back 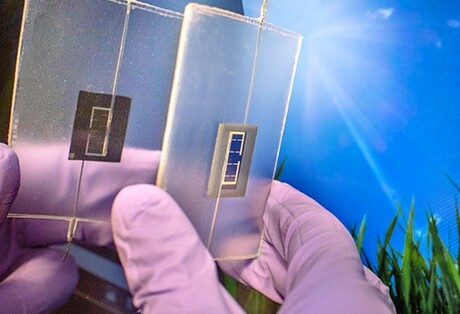 Two types of materials are better than one when it comes to solar cells, according to an international team that has tested a new combination of materials and architecture to improve solar-cell efficiency.

Silicon has long dominated as the premier material for solar cells, helped by its abundance as a raw material. However, perovskites, a class of hybrid organic–inorganic material, are a viable alternative due to their low-cost and large-scale manufacture and potentially higher performance. While still too unstable for full commercialisation, they might become available to the market by 2022.

Researchers from the King Abdullah University of Science and Technology (KAUST), working with colleagues in Canada, Germany and Italy, now show that a combination of the two is the best approach. By optimising the material composition and the architecture of a ‘tandem’ device, the team achieved efficiencies beyond commercial silicon solar panels, as published in the journal Nature Energy.

Sunlight, of course, comes directly from the sun, but illumination also comes from light reflecting off other surfaces, known as albedo. A device architecture that collects light from the back as well as from the front can utilise this source. As explained by KAUST’s Michele De Bastiani, “Our bifacial tandems exploit both direct sunlight and the albedo to generate electricity in a more efficient way than their conventional counterparts.”

He and the team started with a simple silicon device structure that was textured top and bottom to enhance light collection. They then used a solution-processing method to deposit a thin perovskite layer on top. A transparent back electrode allowed light in while also allowing a current to flow out. The researchers tested five perovskite materials, each with a different chemical composition, to increase the absorption of incoming light. In this way, they were able to identify the perovskite that best matched the electronic properties of the silicon.

“A restriction of the tandem configuration is the limited current through the lower of the two subcells,” De Bastiani said. “We designed our tandem with a unique feature: the perovskite subcell generates more current than the silicon counterpart by stealing light that would be otherwise absorbed by the bottom subcell.”

The team tested their bifacial devices and compared the performance to similar monofacial devices in various outdoor settings with a range of albedos, such as, for example, bright sandstone or concrete. They found that, in all conditions, the bifacial configuration outperformed the monofacial one.

“We are now investigating the stability of the perovskite while also scaling up the technology to the module level,” De Bastiani said. “For this, we are looking for industrial partners and sponsors.”

Image caption: The efficiency of solar cells can be increased by combining two light-absorbing materials. Such tandem devices derive energy from both direct sunlight and light reflected from other surfaces. Image ©2021 KAUST; Anastasia Serin.

Lowering the operating temperature of solar panels by just a few degrees can dramatically...