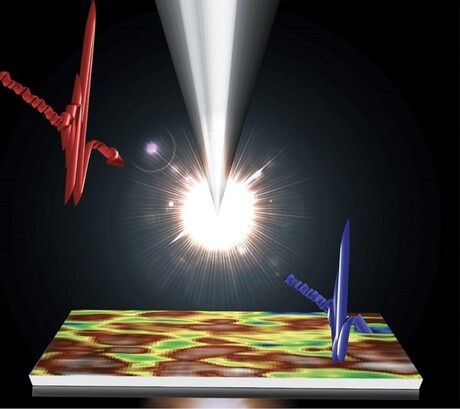 Scientists from the US Department of Energy’s Ames National Laboratory have developed a characterisation tool that allowed them to gain insights into a possible alternative material for solar cells. Under the leadership of Jigang Wang, senior scientist from Ames Lab, the team developed a microscope that uses terahertz waves to collect data on material samples. The team then used their microscope to explore methylammonium lead iodide (MAPbI3) perovskite, a material that could potentially replace silicon in solar cells.

Richard Kim, a scientist from Ames Lab, said that two features make the new scanning probe microscope unique. First, the microscope uses the terahertz range of electromagnetic frequencies to collect data on materials. This range is below the visible light spectrum, falling between the infrared and microwave frequencies. Secondly, the terahertz light is shined through a sharp metallic tip that enhances the microscope’s capabilities towards nanometre-length scales.

Using this new microscope, the team investigated a perovskite material (MAPbI3) that has recently become of interest to scientists as an alternative to silicon in solar cells. Perovskites are a type of semiconductor that transports an electrical charge when it is exposed to visible light. The main challenge to using MAPbI3 in solar cells is that it degrades easily when exposed to elements like heat and moisture. According to researchers, the team expected MAPbI3 to behave like an insulator when they exposed it to the terahertz light. Since the data collected on a sample is a reading of how the light scatters when the material is exposed to the terahertz waves, the researchers expected a consistent low-level light-scatter throughout the material. What they found, however, was that there was a lot of variation in light scattering along the boundary between the grains.

The research findings were published in the ACS Photonics journal.

Image caption: Visualisation of the microscope tip exposing material to terahertz light. The colours on the material represent the light-scattering data, and the red and blue lines represent the terahertz waves. Image credit: US Department of Energy Ames National Lab.