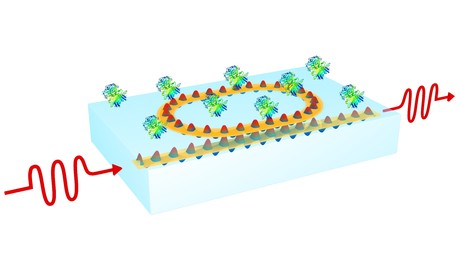 Russian researchers have described a way to increase the sensitivity of biological detectors (biosensors) to the point where they can be used in mobile and wearable devices, as outlined in the journal Sensors.

A biosensor is an electrochemical device that determines the composition of biological fluids in real time. Blood glucose meters used by diabetic patients may well be the only mass-market biosensing devices in use today, but futurologists say household appliances will soon be able to analyse sweat, saliva, aqueous humour and other bodily fluids to identify a person, make medical tests, diagnose disease or continuously monitor the health of an individual and make optimal diet suggestions accordingly.

Until recently such applications were not seriously considered, because the available devices were not sensitive enough and were prohibitively expensive for the consumer market. Now, a research team led by the Moscow Institute of Physics and Technology (MIPT) Center for Photonics and 2D Materials has proposed a radically new biosensor design that could increase detector sensitivity many times over and offer a similarly impressive reduction in price.

“A conventional biosensor incorporates a ring resonator and a waveguide positioned in the same plane,” explained MIPT graduate student Kirill Voronin, who came up with the idea used in the study. “We decided to separate the two elements and put them in two different planes, with the ring above the waveguide.”

The reason researchers did not test that sensor layout before is that manufacturing a flat, single-level device is easier in a laboratory setting. By depositing a thin film and etching it, both a ring resonator and a waveguide are produced at the same time. The alternative two-level design is less convenient for manufacturing unique experimental devices, but it turned out cheaper for mass-producing sensors. The reason for this is that the technological processes at an electronics plant are geared towards layer-by-layer active component placement. More importantly, the new two-tier biosensor design resulted in a many times higher sensitivity.

“We have positioned the strip waveguide under the resonator, in the bulk dielectric,” said paper co-author Aleksey Arsenin. “The resonator, in turn, is at the interface between the dielectric substrate and the external environment. By optimising the refractive indices of the two surrounding media, we achieve a significantly higher sensitivity.”

The newly proposed biosensor layout has both the source and the detector of light within the dielectric. The only part that remains on the outside is the sensitive element — that is, the gold ring measuring several dozen micrometres in diameter and one-thousandth that in thickness.

Voronin said the team’s method for making biosensors more responsive will take the technology to a qualitatively new level, stating, “The new layout is intended to make biosensors much easier to manufacture, and therefore cheaper. Optical lithography is the only technique necessary to produce detectors based on our principle. No moving parts are involved, and a tuneable laser operating in a tight frequency range will suffice.”

Valentyn Volkov, who heads the MIPT Center for Photonics and 2D Materials, estimates that it will take about three years to develop an industrial design based on the proposed technology.