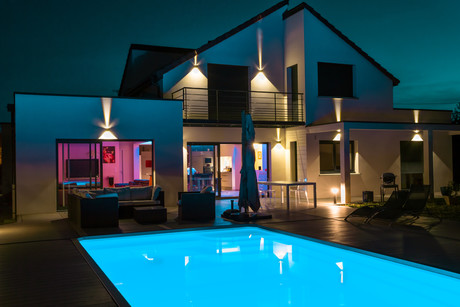 Over the past 10 years the use of LEDs for home and commercial lighting has increased exponentially, with a wide range of applications and specialist features that incandescent and fluorescent lighting systems simply cannot meet.

The improvements in the efficiency of the LED over the past few years has also led to a considerable improvement in the lifespan of the component, which is now substantially greater than both the traditional incandescent and fluorescent lighting technologies. This has meant that for a number of applications, LED lighting is now regarded as very low maintenance or even maintenance free, and is widely used for road, traffic and vehicle lighting.

The use of an encapsulation resin to protect LEDs has become increasingly common over the past few years. The selection of the resin is dependent upon a number of different factors; the viscosity of the mixed system, useable life and gel time for the liquid properties, as well as the hardness, density, colour and operating temperature of the cured resin. When directly protecting the LED, there are a number of essential factors; key amongst these is the clarity of the material applied to ensure the maximum utilisation of light output from the LED. In addition, any potential changes that can occur over the lifetime of the LED must also be considered.

Electrolube has developed a number of polyurethane encapsulation resins that cover a range of different property requirements that have been optimised for the LED encapsulation market. Two-component (2K) resin systems are designed to offer the ease of handling and flow to allow the liquid resin to flow into the housing and around the LEDs, yet will react to form a crosslinked polymer that is tough and protects against the environment.

Polyurethane resins are available in a range of different size packs, which are designed to allow both manual and machine mixing and dispensing. For low-volume or prototype work, often manual application is the best option. While for series production, machine application is by far the preferred method as it allows for the production of a consistently mixed resin, which is independent of the machine operator and the unit into which the resin is being applied. Certainly, the use of a machine is the most economical method of resin application, and there are a number of manufacturers who can offer suitable equipment dependent upon the volumes to be dispensed.

There are some important considerations to note when potting LEDs. For example, it is important that the geometry of the housing and any other pieces such as lenses are considered.

The mixed resin is designed to flow around any obstacles in its way; however, if there are undercuts or overhangs then these can potentially trap air, which can result in poor adhesion, as well as lead to bubble formation during the curing time. If a large volume of resin is to be potted into a single unit, then it would be worthwhile considering potting the desired amount in two or three charges or shots; this then allows for any resin shrinkage to be taken into account, as well as helping to minimise any trapped air. Also the staged application approach allows for the use of a second resin, which could be an opaque or coloured layer to give the desired optical effects in the unit.

optical properties of the cured resin have been carefully assessed to ensure that the resins preserve the colour characteristics of the LED as far as possible. When the calculated colour temperature of the LED is measured, it has been found that there is a shift in temperature, which is proportional to the depth of the resin layer applied over the top of the LED. It is, however, possible to control the colour shift by careful selection of the resin type and the depth to which it is applied.

Of course we have mainly been discussing the LED itself, which is the most visible component of the lighting unit to the customer, but there are also a number of other components that are present that would also benefit from being encapsulated in resin to extend their service life; these include transformers, sensors, capacitors and resistors. For these components, there are a wide range of encapsulation and thermal management products which are specifically designed to maximise the service life of the complete unit. For certain applications, such as emergency, tunnel and explosive atmospheres lighting, it is possible to use flame-retardant resins to encapsulate the units to meet the ATEX requirements.

Jade Bridges highlights the use of LEDs in various environments and introduces how to specify...

Getting the best performance from resin encapsulants

In this article on resin potting and encapsulation, resins expert Alistair Little expands on a...