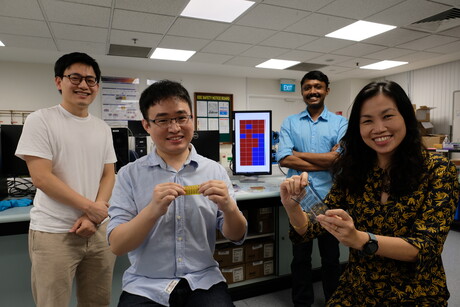 Researchers from Nanyang Technological University, Singapore (NTU Singapore) have invented a pressure sensor that can be ‘printed’ onto flexible material such as paper or plastic film, and is so sensitive that it can accurately detect a single flower petal or a grain of rice.

A working prototype of the sensor has been integrated into a robotic hand that is capable of gripping delicate objects, such as an egg, and the team believe their work paves the way for touch-sensitive ‘skin’ for robots and lightweight health-monitoring medical devices.

The sensors are created with a new type of thin-film organic electrochemical transistors (OECTs) that use solid-state polymer electrolytes. OECTs are transistors that conduct both ions and electrons, allowing them to detect biological signals and convert them into electronic signals. This makes them suitable for a variety of applications from medical devices to energy storage. In particular, they have been used as sensors to measure a variety of biological functions, such as heartbeats and brainwaves.

Conventional OECTs use liquid electrolytes for such biosensing applications. However, liquid-based OECTs have limitations — they are large, have a limited operational lifespan and are incompatible with tactile input or external pressure. The research team’s pressure sensors make use of solid polymer electrolytes instead, which can conduct ions and electrons just as effectively as liquid-based OECTs while overcoming their limitations.

“The all solid-state OECTs that we developed offer several benefits over liquid electrolytes,” said Assistant Professor Leong Wei Lin, leader of the research team. “These new sensors can be bent, as there is no risk of leaking; are flexible and adaptable to various surfaces; and are cheap to print in various sizes. They also use very little power and are biocompatible, making them safe for applications in health care and food handling.

“The development of highly sensitive flexible pressure sensors is particularly attractive for new and disruptive technologies such as cyber-physical systems, soft robotics and wearable healthcare devices.”

The team’s sensors work by creating a voltage change when pressure is applied. Each sensor has a layer of micro-pyramids on top of the electrode layer. The points of the pyramids’ tips make them sensitive to detecting extremely lightweight objects.

These micro-pyramids are deformed when pressure is applied on them, pushing mobile ions from the pyramid layer into the conductive layer. The movement of ions generates a voltage change that can be measured and translated into pressure sensitivity.

The pressure sensors can detect objects as light as 1.1 Pa, or 0.0112 g/cm2, making them exponentially more sensitive than the various types of pressure sensors in use today. These include capacitive sensors, which are used in smartphone touch screens; piezoresistive sensors, used in cars to check for fluid pressure; and piezoelectric sensors, found in accelerometers.

The sensor’s low operating voltage of 1 V also allows it to function with extremely low power, reducing the need for bulky battery packs.

The research team has integrated these sensors into a robot ‘hand’, which allows operators to grip onto delicate objects without damaging them, as the precise amount of pressure can be gauged and calibrated through the sensors’ feedback. The team is developing this technology further to create smarter robot grippers that use these sensors to distinguish between various shapes and surface textures.

The team is also working on printing these sensors onto large, flexible patches, which can then be used as a ‘skin’ on autonomous robots for real-time feedback and touch sensing. Robots covered in such a skin can react to stimuli the same way that humans do, making them safer and more responsive when deployed in crowds. For instance, they can respond to even the slightest touch, such as pausing in their tracks if someone brushes past them, and then moving on when it is clear to do so.

The sensors could also be a suitable alternative for monitoring the pulse rate and blood pressure of patients whose skins might be extremely sensitive to external pressure. They can be printed onto soft, flexible patches as thin as plaster bandages, allowing medical workers to stick them onto patients and take readings without causing discomfort.

The team is developing further applications for their breakthrough based on a grant from Singapore’s National Robotics Programme.