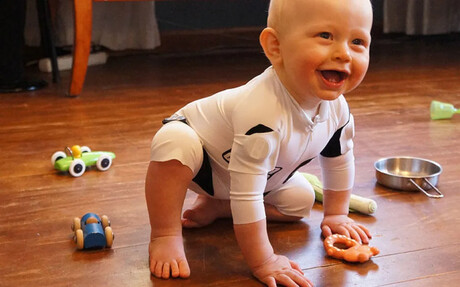 A research group at the BABA Center, at Helsinki Children’s Hospital, has developed a novel wearable for infants for the assessment of motor abilities during early development. The smart jumpsuit MAIJU (Motor Assessment of Infants with a Jumpsuit) is a wearable medical device equipped with multiple movement sensors which assist in assessing and predicting children’s neurological development.

“Our research shows that it is very possible to assess the motor development of an infant outside of a hospital or special laboratory setting,” said Professor Sampsa Vanhatalo, leader of the BABA Center. “A particular advantage of the MAIJU methodology is the fact that it allows us to carry out developmental assessments in the natural environment of the child, such as a home or day care.”

In a study in the journal Communications Medicine, the scientists measured infants at five to 19 months of age using the MAIJU jumpsuit during spontaneous playtime, mostly in the children’s own home environment. At the beginning of the study, the postures and movements of the infants were identified visually from a video recording using a motility description scheme custom developed for this study. This information was then used to train an algorithm based on machine learning to recognise the same postures and movements for every second of each child’s playtime at an accuracy that equals visual assessment by a trained expert.

The jumpsuit and associated analytical solutions are claimed to allow both the assessment and tracking of child’s motor maturation at an unprecedented accuracy. This can be used for early clinical diagnostics and other developmental assessments, and it also makes it possible to measure the efficacy of various kinds of medical treatments and therapies.

“Methods of this kind are urgently needed to support the research and novel therapeutic innovations of early neurological development,” Professor Leena Haataja added. This is because the earlier neurodevelopmental delays and related challenges are identified, the better the child can be supported.

Vanhatalo believes the team’s successful work in wearable development has a bright future ahead, stating, “Our methods can be automatised and scaled up for very wide use. It is also possible that our technology could be adapted for developing wearable solutions to help other patient groups, such as older children or even elderly people.”