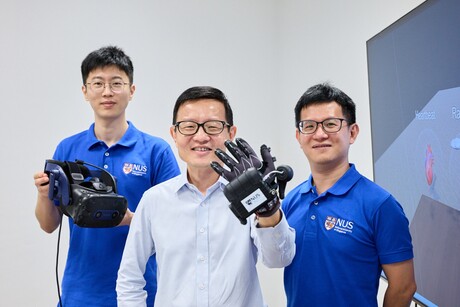 A team of researchers from the National University of Singapore have developed the HaptGlove — an untethered and lightweight haptic glove that provides users with skin-like and movement sensations when interacting with a virtual object. The glove promises to enhance a user’s sense of touch in virtual reality (VR), with the aim of providing a more authentic and immersive experience within the metaverse.

While the concept of haptic gloves is not new, current technologies are not able to give users a realistic sense of touch. Typical haptic glove designs on the market use vibration motors, which cannot accurately replicate the real-world sense of touch such as simulating the hardness and shape of a VR object. Other haptic gloves use pneumatic actuators, which are devices that generate a sense of pressure, but their bulky designs limit the user’s movement.

Professor Lim Chwee Teck, leader of the research team, said VR should not just be about a visual and auditory experience; it should present the ability to interact with VR objects. “However, current methods of pressing on a virtual panel or interacting with another avatar lack the sensation of touch that we experience in the real world. This prompted me to work with my team to develop a haptic glove to enable ‘physical’ touch in the virtual world,” Lim said.

Lim and his team went on to develop HaptGlove, a portable and flexible haptic glove that enables users to have immersive touch and feel of VR objects with enhanced realism in VR. HaptGlove incorporates lightweight pneumatic control with the team’s microfluidic sensing technology to reduce its size and weight significantly, and does not require bulky accessories. “The HaptGlove’s unique design allows users to interact with the virtual world more naturally and realistically, which would give users unobtrusive recreational or competitive sensation in VR,” Lim said.

HaptGlove contains five pairs of haptic feedback modules, one for each finger. The modules are controlled wirelessly to sense the VR object in terms of shape, size and stiffness. When a user puts on HaptGlove, they can sense when the avatar’s hand touches, grasps and manipulates a VR object. This is achieved by using a microfluidic pneumatic indenter to deliver real-time pressure to the user’s fingertips. The glove can also simulate the shape and stiffness (soft or hard) of the object that the avatar is touching, by restricting the user’s finger positions. This adds realism to the virtual interaction.

Using proprietary software developed by the NUS research team, HaptGlove achieves a visual–haptic delay of less than 20 milliseconds, which is reportedly faster than conventional haptic gloves, delivering a near-real-time user experience. The NUS team’s prototype is also comfortable for users to wear, weighing only 250 grams.

Lim and his team started working on the HaptGlove in 2019 and took two years to develop a prototype. To test the performance of the HaptGlove, researchers recruited 20 users who wore the glove to sort four balls of different stiffness in the virtual world. Besides achieving over 90% accuracy in completing the tasks, the users noted that the HaptGlove had enhanced realism in VR and improved their overall experience, compared to devices using vibration motors.

The HaptGlove also had useful applications in medicine and education; it could assist surgeons to better prepare for an operation by simulating a hyper-realistic environment, or give students a hands-on learning experience by simulating palpation on different body parts. The NUS team has filed a patent for their design and hopes to commercialise the product within two years through NUS spin-off Microtube Technologies. The team aims for HaptGlove to retail for half the price of commercially-available haptic gloves, which currently cost between S$5000 to S$20,000.