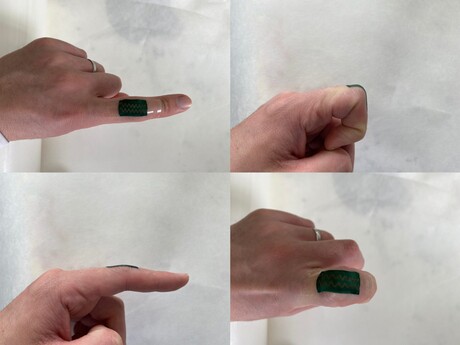 Scientists from the Technion – Israel Institute of Technology have created a wearable motion sensor capable of identifying movements such as bending and twisting. Described in the journal Advanced Materials, the smart ‘e-skin’ was produced using a highly stretchable electronic material, which essentially forms an electronic skin capable of recognising the range of movement human joints normally make — with up to half a degree precision.

Existing wearable motion sensors can recognise bending movement, but not twisting. Existing twisting sensors, on the other hand, are large and cumbersome. This problem was overcome by Technion PhD candidate Yehu David Horev and postdoctoral fellow Dr Arnab Maity. Horev found a way to form a composite material that was both conductive (and thus, usable as a sensor) and flexible, stretchable, breathable and biocompatible, and that did not change its electrical properties when stretched. Dr Maity then solved the mathematics of analysing the received signal, creating an algorithm capable of mapping bending and twisting motion — the nature of the movement, its speed and its angle. The novel sensor is breathable, durable and lightweight, allowing it to be worn on the human body for prolonged periods.

“Electrically conductive polymers are usually quite brittle,” Horev said. “To solve this, we created a composite material that is a little like fabric: the individual polymer ‘threads’ cannot withstand the strain on the material, but their movement relative to each other lets it stretch without breaking. It is not too different from what lends stretch to T-shirts. This allows the conductive polymer withstand extreme mechanical conditions without losing its electrical properties.”

“This sensor has many possible applications,” added Professor Hossam Haick, Head of Technion’s Laboratory for Nanomaterial-Based Devices. “It can be used in early disease diagnosis, alerting of breathing alterations and motor system disorders such as Parkinson’s disease. It can be used to assist patients’ motor recovery and be integrated into prosthetic limbs. In robotics, the feedback it provides is crucial for precise motion. In industrial uses, such sensors are necessary in monitoring systems, putting them at the core of the Fourth Industrial Revolution.”

The group made a point of using cheap materials to create their sensor, with Prof Haick stating, “If we make a device that is very expensive, only a small number of institutions in the Western world can afford to use it. We want the technological advances we achieve to benefit everyone, regardless of their geographic location and socioeconomic status.”