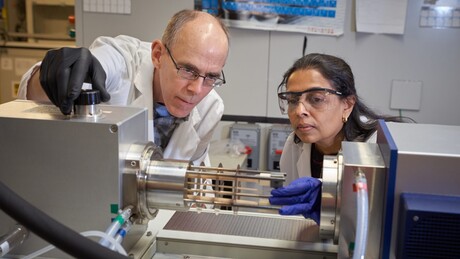 A team of researchers in the Clemson Department of Physics and Astronomy and the Clemson Nanomaterials Institute (CNI) has developed a method to evaluate thermoelectric materials. Department of Physics and Astronomy Research Assistant Professor Sriparna Bhattacharya, Engineer Herbert Behlow and CNI Founding Director Apparao Rao collaborated with researcher HJ Goldsmid, professor emeritus at UNSW in Sydney, Australia, to create a one-stop method for evaluating the efficiency of thermoelectric materials.

Thermoelectric materials use a temperature gradient (ΔT) to generate electricity. They can be used for power generation by converting heat to electricity (Seebeck method) or refrigeration by converting electricity to cooling (Peltier method). Thermoelectric materials are used in a range of applications and their efficiency is measured by a figure-of-merit, or zT, which considers the material’s temperature, electrical conductivity and thermal conductivity. The traditional method of determining zT requires two measurements using different sets of equipment, something that sometimes causes researchers to report incorrect results. Researchers sometimes mistakenly measure electrical conductivity (charge flow) and thermal conductivity (heat flow) along different directions in their sample when it is switched from one instrument to the other.

Peltier cooling had not been used previously for evaluating zT because of a high ΔT, or the maximum achievable difference in temperature between the cold junction and ambient. According to Behlow, the researchers used thermocouples containing a metal and a semiconductor junction to reduce the ΔT to a narrower range so that the temperature-dependent zT may be determined with a higher resolution.

“The idea to use a metal and a semiconductor to reduce ΔT was hidden in plain sight until Professor Goldsmid recognised this was the case and proposed this new method for measuring zT. The experimental set-up we developed at CNI (with the help of the Department of Physics and Astronomy Instrument Shop) to test Professor Goldsmid’s theory ensures that the charge flow and the heat flow are measured in the same direction in the sample,” Rao said. “Therefore, by design, our method provides accurate zT,” Behlow said.

Isabel Rancu, a student at the South Carolina Governor’s School for Science and Mathematics, contributed to the study by working with the team and independently verifying the model calculations reported by Behlow. The UNSW-Clemson study was published in the Journal of Applied Physics.

Researchers have successfully measured spin transport in a thin film of specific molecules at...

Physicists have demonstrated a new method that could make the quantum properties of macroscopic...

Australian physicists have outlined a way to achieve more accurate measurements of microscopic...