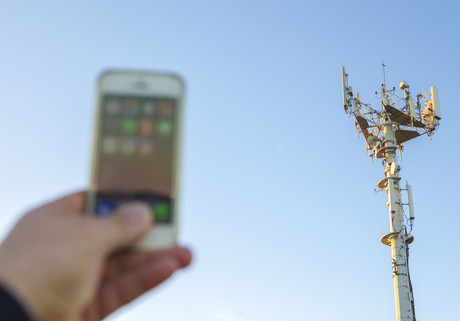 Japanese researchers have developed a terahertz detector that enables extremely rapid wireless data communication and highly sensitive radar by using a frequency range that has previously been very difficult to work with. Published in the journal Scientific Reports, the team’s approach combines sensitive electronics and a novel method for handling high frequencies to achieve the long-sought goal of using terahertz radiation for sending and receiving wireless data.

Wireless data is in great demand. Not only do smartphones need high speeds to stream videos on the go, but some people living in rural areas rely entirely on wireless for their home broadband connections. Terahertz radiation — electromagnetic waves with frequencies around 1012 cycles per second — has long been tempting scientists and mobile phone companies alike, as the high frequency of terahertz radiation would allow more data to be transmitted per second, compared with the current standard of about 800 MHz.

However, a practical terahertz receiver has remained elusive, for two main reasons. First, the electromagnetic oscillations are just too fast for conventional electronics to handle, and both the terahertz oscillator and detector have poor efficiency. Second, the thermal noise of the room-temperature detector obscures the received signals above.

Now, researchers at Osaka University have invented a novel receiver that not only overcomes these obstacles, it also reportedly set the record for the fastest error-free real-time transmission speed to date (30 Gbps). They achieved this by utilising a special electronic component called a resonant tunnelling diode.

In contrast with normal electronics — for which the current always increases at larger voltages — in a resonant tunnelling diode there is a specific ‘resonant’ voltage that yields the peak current. Thus, there exists a region in which the current actually falls with increasing voltage.

This nonlinear behaviour allowed the scientists to synchronise the rapid received terahertz signals with an internal electronic oscillator in the device, then separate the data from the carrier wave. In the end, the sensitivity was enhanced by a factor of 10,000.

Mobile phone towers are not the only places you might find terahertz radiation in the future. As noted by corresponding author Masayuki Fujita, “This technology can be put to work in a wide range of applications, in addition to next-generation 6G wireless communication. These include spectroscopic sensing, non-destructive inspection and high-resolution radar.”