Controlling the momentum of electrons in graphene

Pennsylvania State University researchers have developed a device made of bilayer graphene — an atomically thin arrangement of carbon atoms — which provides experimental proof of the ability to control the momentum of electrons. Published in the journal Nature Nanotechnology, the study is one step forward in a new field of physics called valleytronics.

“Current silicon-based transistor devices rely on the charge of electrons to turn the device on or off, but many labs are looking at new ways to manipulate electrons based on other variables, called degrees of freedom,” said Associate Professor Jun Zhu, who directed the research. “Charge is one degree of freedom. Electron spin is another, and the ability to build transistors based on spin, called spintronics, is still in the development stage. A third electronic degree of freedom is the valley state of electrons, which is based on their energy in relation to their momentum.”

Zhu suggested thinking of electrons as cars and the valley states as blue and red colours. Inside a sheet of bilayer graphene, electrons will normally occupy both red and blue valley states and travel in all directions. The device her PhD student, Jing Li, has been working on can make the red cars go in one direction and the blue cars in the opposite direction.

“The system that Jing created puts a pair of gates above and below a bilayer graphene sheet,” Zhu said. “Then he adds an electric field perpendicular to the plane.”

Li elaborated, “By applying a positive voltage on one side and a negative voltage on the other, a bandgap opens in bilayer graphene, which it doesn’t normally have. In the middle, between the two sides, we leave a physical gap of about 70 nanometres.” 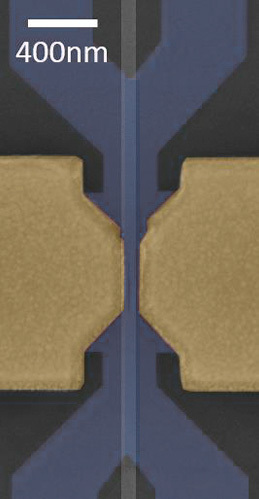 A scanned electron micrograph of a device used in the experiment. Thin sheets of graphene and hexagonal boron nitride are stacked and shaped by electron beam lithography to create this device. The purple layer is the bilayer graphene sheet. The bottom pair of split gates (dark squares) are made of multilayer graphene. The top pair of split gates (gold bars) are made of gold. The one-dimensional wires live in the gap created by the split gates.

Inside this gap lives one-dimensional metallic states, or wires, that are colour-coded freeways for electrons. The red cars travel in one direction and the blue cars travel in the opposite direction. In theory, coloured electrons could travel unhindered along the wires for a long distance with very little resistance. Smaller resistance means power consumption is lower in electronic devices and less heat is generated.

“It’s quite remarkable that such states can be created in the interior of an insulating bilayer graphene sheet, using just a few gates,” said Zhu. “They are not yet resistance-free, and we are doing more experiments to understand where resistance might come from. We are also trying to build valves that control the electron flow based on the colour of the electrons.”

Top image: One-dimensional wires created in bilayer graphene gated by two pairs of split gates above and below the sheet. Wires travelling in opposite directions carry electrons of different valley states labeled as K and K’ in the figure. Image credit: Jun Zhu/Penn State.