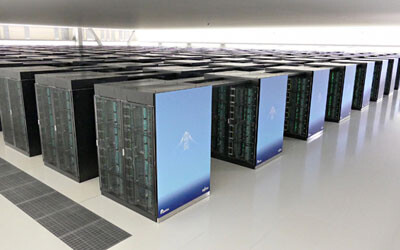 The supercomputer Fugaku, which is being developed jointly by RIKEN and Fujitsu based on Arm technology, has once again taken out the top spot on the TOP500 list — a ranking of the world’s fastest supercomputers that is published twice a year.

Currently installed at the RIKEN Center for Computational Science (R-CCS) in Kobe, Fugaku is being developed under a national plan to design Japan’s next-generation flagship supercomputer and to carry out a wide range of applications that will address high-priority social and scientific issues. Scheduled to begin full operation in fiscal 2021, it will be put to use in applications aimed at achieving the Society 5.0 plan, by running applications in areas such as drug discovery; personalised and preventative medicine; simulations of natural disasters; weather and climate forecasting; energy creation, storage and use; development of clean energy; new material development; new design and production processes; and elucidation of the fundamental laws and evolution of the universe.

In addition to the TOP500 list, Fugaku also took first place on the HPCG benchmark, a ranking of supercomputers running real-world applications; the HPL-AI benchmark, which ranks supercomputers based on their performance capabilities for tasks typically used in artificial intelligence applications; and Graph 500, which ranks systems based on data-intensive loads. The results were achieved with Fugaku’s full complement of 158,976 nodes fit into 432 racks.

On the TOP500, the supercomputer achieved a High-Performance Linpack (HPL) score of 442.01 petaflops, an improvement over the 415.53 petaflops set in June. On HPCG, it scored 16 petaflops, up from 13.40 last time, and on HPL-AI it gained a score of 2 exaflops, over 1.42 in June. Its top ranking on Graph 500 was won by a collaboration involving RIKEN, Kyushu University, Fixstars and Fujitsu, with the supercomputer solving a breadth-first search of an enormous graph with 1.1 trillion nodes and 17.6 trillion edges in approximately 0.25 seconds, earning it a score of 102,955 gigaTEPS — a major advance over its score of 70,980 gigaTEPS in June and more than four times the score attained by its nearest competitor, China’s Sunway TaihuLight, which performed at 23,756 gigaTEPS.

“We are thrilled that we were able to take the top spot on the major benchmarks for the second consecutive term,” said Naoki Shinjo, Corporate Executive Officer at Fujitsu. “This time, we were able to use Fugaku in its completed form and were able to make significant improvements upon the performance we attained in June, to prove the system’s high potential. In the future, we anticipate that Fugaku will demonstrate high application performance and will be widely used as a supercomputer contributing to the realisation of Society 5.0. We would like to once again express our sincere gratitude to RIKEN and others for their great cooperation and support.”

The awards were announced on 16 November at the SC20 High-Performance Computing Conference, held as an online event. The full list is available here.

The end of just-in-time for electronics manufacturing

We are used to the cycle of shortage and supply in electronics, though the current one is of a...