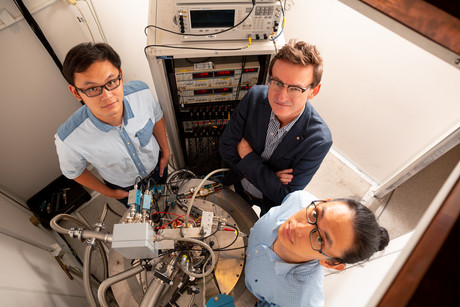 Engineers from UNSW Sydney have successfully measured the fidelity — that is, the accuracy — of two-qubit logic operations in silicon for the first time, with highly promising results that are said to confirm the promise of silicon for quantum computing.

The research was carried out by a team led by Professor Andrew Dzurak, with experiments performed by PhD student Wister Huang and senior research fellow Dr Henry Yang. The results have been published in the journal Nature.

Quantum computers will have a wide range of important applications in the future — including finance, security and health care — thanks to their ability to perform complex calculations at great speeds, including solving problems that are simply beyond the ability of today’s computers. These quantum computations will be made up of one- and two-qubit operations, Prof Dzurak explained — but the accuracy of both operations needs to be very high.

“For most of those important applications, millions of qubits will be needed, and you’re going to have to correct quantum errors, even when they’re small,” he said.

“For error correction to be possible, the qubits themselves have to be very accurate in the first place — so it’s crucial to assess their fidelity.”

In 2015 Prof Dzurak’s team was the first to build a quantum logic gate in silicon, making calculations between two qubits of information possible — and thereby clearing a crucial hurdle to making silicon quantum computers a reality. A number of groups around the world have since demonstrated two-qubit gates in silicon, but the true accuracy of such a two-qubit gate was until now unknown.

That all changed when Prof Dzurak and his team implemented and performed Clifford-based fidelity benchmarking — a technique that can assess qubit accuracy across all technology platforms — demonstrating an average two-qubit gate fidelity of 98%. As explained by Huang, “We achieved such a high fidelity by characterising and mitigating primary error sources, thus improving gate fidelities to the point where randomised benchmarking sequences of significant length — more than 50 gate operations — could be performed on our two-qubit device.”

The researchers say the study is further proof that silicon as a technology platform is ideal for scaling up to the large numbers of qubits needed for universal quantum computing. Given that silicon has been at the heart of the global computer industry for almost 60 years, its properties are already well understood and existing silicon chip production facilities can readily adapt to the technology.

“If our fidelity value had been too low, it would have meant serious problems for the future of silicon quantum computing,” Prof Dzurak said. “The fact that it is near 99% puts it in the ballpark we need, and there are excellent prospects for further improvement.

“We think that we’ll achieve significantly higher fidelities in the near future, opening the path to full-scale, fault-tolerant quantum computation. We’re now on the verge of a two-qubit accuracy that’s high enough for quantum error correction.”

In another recent breakthrough — published in the journal Nature Electronics — the same team achieved the record for the world’s most accurate one-qubit gate in a silicon quantum dot, with a remarkable fidelity of 99.96%. According to UNSW Dean of Engineering Professor Mark Hoffman, the team is clearly in the process of taking quantum computing across the threshold from the theoretical to the real.

“Quantum computing is this century’s space race — and Sydney is leading the charge,” Prof Hoffman said.

“This [latest] milestone is another step towards realising a large-scale quantum computer — and it reinforces the fact that silicon is an extremely attractive approach that we believe will get UNSW there first.”