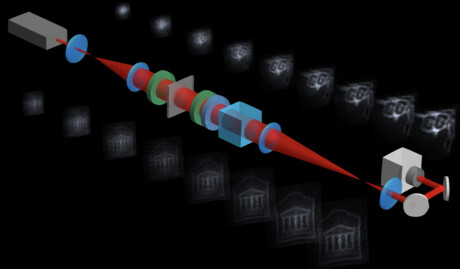 Researchers at the University of Ottawa have used liquid crystals to create a flat magic window — a transparent device that produces a hidden image when light shines on it. The technology represents a new twist on a very old light trick.

Thousands of years ago, artisans in China and Japan made bronze mirrors that looked like a normal flat mirror while viewing one’s reflection but formed another image when hit by direct sunlight. It took until the early 20th century for scientists to understand that these devices work because an image cast into the back of the mirror creates small surface variations that cause the image to form — and it took until now for engineers to apply the same principle to liquid crystals for high-tech displays.

“The magic window we created appears perfectly flat to the naked eye but, in fact, has slight variations that create an image in response to light,” said research team leader Felix Hufnagel. “By designing the window to be relatively smooth, the image that is created can be seen over a large range of distances from the window.”

Writing in the journal Optica, Hufnagel and colleagues describe the process they developed for creating transparent liquid crystal magic windows that can produce any desired image. The process can also be used to create magic mirrors that reflect, rather than transmit, light to create an image.

“Using liquid crystals to make magic windows or mirrors could one day make it possible to create a reconfigurable version for producing dynamic artistic magic windows or movies,” Hufnagel said. “The ability to obtain a long depth of focus could also make the approach useful for 3D displays that produce stable 3D images even when viewed from different distances.”

Although scientists have understood for decades that the ancient bronze magic mirrors formed images as a result of small surface variations, it was not until 2005 that Michael Berry, a mathematical physicist at the University of Bristol, derived the mathematical basis for this effect. He later extended this knowledge to develop a theoretical basis for transparent magic windows in addition to reflective magic mirrors. This work inspired Hufnagel and colleagues to create a magic window based on liquid crystals.

Liquid crystals are materials that can flow like a conventional liquid but have molecules that can be oriented like a solid crystal. In the new work, the researchers used a modified version of a well-known fabrication process that produces a specific liquid crystal pattern that allows a desired image to be created when illuminated.

“On a conceptual level, the theory developed by Berry was instrumental in determining how these liquid crystals must be oriented to create an image that is stable over a large distance,” Hufnagel said. “Our use of flat optical elements and a liquid crystal pattern with gentle variations prescribed by Berry’s Laplacian image theory allows the magic windows to appear normal, or flat, when one looks through them.”

After fabricating a magic mirror and window, the researchers used a camera to measure the light intensity patterns produced by both devices. When illuminated with a laser beam, both the mirror and window produced a visible image that remained stable even as the distance between the camera and the mirror or window changed. The researchers also showed that the devices created images when illuminated with an LED light source, which would be more practical to use in real-life applications.

The researchers are now working to use their fabrication approach to create quantum magic plates. For example, two of these plates could create entangled images which one could use to study new quantum imaging protocols. They are also exploring the possibility of fabricating magic windows using approaches other than liquid crystals. For instance, using dielectric metasurfaces to make a magic window device could reduce its footprint while increasing bandwidth.