Novel heterostructure could be key to quantum electronics 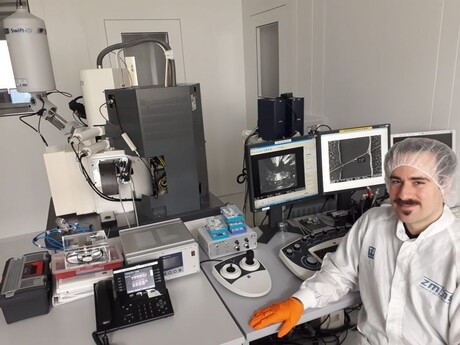 Researchers from TU Wien have used tailored manufacturing process to bond pure germanium with aluminium in a way that atomically sharp interfaces are created, resulting in a monolithic metal–semiconductor–metal heterostructure.

The nanostructure shows unique properties that are particularly evident at low temperatures, which could make it suitable for quantum technology applications such as processing quantum bits. The results have been published in the journal Advanced Materials.

“Germanium is a material which will definitely play an important role in semiconductor technology for the development of faster and more energy-efficient components,” said Dr Masiar Sistani from TU Wien. However, if it is used to produce components on a nanometre scale, major problems arise: the material makes it extremely difficult to produce high-quality electrical contacts. This is related to the high impact of even small impurities at the contact points that significantly alter the electrical properties.

“We have therefore set ourselves the task of developing a new manufacturing method that enables reliable and reproducible contact properties,” Dr Sistani said.

The key is temperature: when nanometre-structured germanium and aluminium are brought into contact and heated, the atoms of both materials begin to diffuse into the neighbouring material, but to very different extents: the germanium atoms move rapidly into the aluminium, whereas aluminium hardly diffuses into the germanium at all.

“Thus, if you connect two aluminium contacts to a thin germanium nanowire and raise the temperature to 350°C, the germanium atoms diffuse off the edge of the nanowire. This creates empty spaces into which the aluminium can then easily penetrate,” Dr Sistani said. “In the end, only a few-nanometre-area in the middle of the nanowire consists of germanium; the rest has been filled up by aluminium.”

Normally aluminium is made up of tiny crystal grains, but this novel fabrication method forms a perfect single crystal in which the aluminium atoms are arranged in a uniform pattern. As can be seen under a transmission electron microscope, a perfectly clean and atomically sharp transition is formed between germanium and aluminium, with no disordered region in between. In contrast to conventional methods where electrical contacts are applied to a semiconductor — for example, by evaporating a metal — no oxides can form at the boundary layer.

In order to take a closer look at the properties of their heterostructure of germanium and aluminium at low temperature, TU Wien collaborated with Institut Néel at The French National Centre for Scientific Research (CNRS). It turned out that the novel structure indeed has quite remarkable properties. For one thing, the aluminium becomes superconducting — a property that is also transferred to the adjacent germanium semiconductor and can be controlled with electric fields.

“Not only were we able to demonstrate superconductivity in pure, undoped germanium for the first time, we were also able to show that this structure can be switched between quite different operating states using electric fields,” Dr Sistani said. “Such a germanium quantum dot device can not only be superconducting but also completely insulating, or it can behave like a Josephson transistor — an important basic element of quantum electronic circuits.”

The heterostructure demonstrates the physical properties that are needed for quantum technologies, such as high carrier mobility and excellent manipulability with electric fields, and it has the additional advantage of fitting well with already established microelectronics technologies: germanium is already used in current chip architectures and the temperatures required for heterostructure formation are compatible with well-established semiconductor processing schemes. The novel structure thus opens up a technologically realistic possibility of enabling further novel and energy-saving devices.

The tiny, transparent and flexible material could be used as a novel dielectric (insulator)...

Scientists have reported the design of a silicon-based non-volatile switch that would greatly...