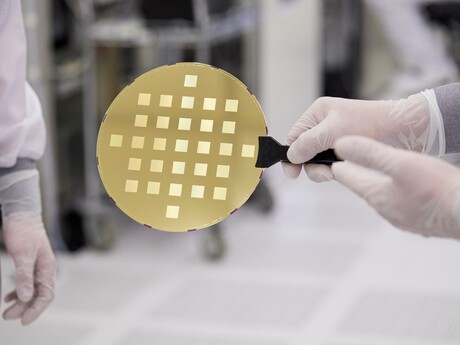 Researchers from the Fraunhofer Institute for Silicon Technology ISIT and IMS Nanofabrication have pushed the boundaries when it comes to MEMS processing of a microsystem switching element which is at the core of an electron beam mask writer — a crucial piece of equipment in the production of the latest generation of microchips. Their efforts have earned them the 2021 Joseph von Fraunhofer Prize, which was awarded to Michael Kampmann and Martin Witt from Fraunhofer ISIT and Dr Jacqueline Atanelov from IMS.

The continuous development of smartphones and other electronic devices can be summed up as ‘smaller, faster, more powerful’. At the core of these devices are microchips that also need to become smaller and better as part of this development, but many manufacturing technologies are now reaching their limits. The only solution that can shift these limits stems from the electron multi-beam mask writer, developed by Vienna-based IMS Nanofabrication. The key element in this device comes from Fraunhofer ISIT.

“Previously, it was only possible to achieve process sizes of just under 10 nm on the chips — an atom is 0.1 nm — but the new manufacturing method makes process sizes of 7 nm and less a possibility,” Witt said. This is believed to be unrivalled around the world, which would mean the electron multi-beam mask writer is currently the only technology that enables further miniaturisation of the chips.

In conventional chip production, a wafer of the semiconductor material silicon is coated evenly with photoresist, which is hardened by exposing it to targeted light. The areas that are not hardened are removed and the silicon is processed at the exposed areas. The hardened part of the photoresist is then also removed and the process starts all over again. In this way, the chip is created layer by layer — for complex chips, up to 70 light exposure stages are necessary. To ensure the light is targeted to where the photoresist needs to be hardened while leaving the other areas in the dark, various masks are used. These are produced in a similar way to the chips, but in this case an electron beam is used to harden the photoresist.

In the new method, Kampmann explained, “Instead of writing the mask structures on the electron-sensitive photoresist with a single beam, we use 512 x 512 beams, so more than 262,000 beams.” This is made possible by a MEMS switching element from Fraunhofer ISIT, which essentially forms the core of the new multi-beam mask writer. In simple terms, this microsystem switching element is like a membrane with more than 262,000 openings that allow the electron beams through. But unlike jets of water from a shower head, these beams do not run in parallel. Instead, they can be individually controlled and redirected by special control electrodes.

“The electron multi-beam mask writer allows us to create complex structures in high quality and resolution in just a few hours,” Dr Atanelov said. The lack of rival technologies also means the device is achieving commercial success, bringing in significant revenue for both IMS and Fraunhofer ISIT while enabling further miniaturisation to be achieved.

A new micro-LED can efficiently emit pure red light, and it may help in the quest to develop...