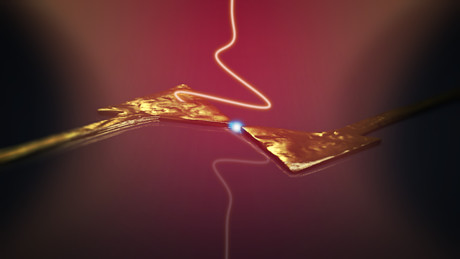 European researchers have found a way of transporting electrons at times below the femtosecond range by manipulating them with light — a breakthrough that could have major implications for the future of data processing and computing.

Contemporary electronic components, which are traditionally based on silicon semiconductor technology, can be switched on or off within picoseconds (ie, 10-12 s). Standard mobile phones and computers work at maximum frequencies of several gigahertz, while individual transistors can approach one terahertz. Further increasing the speed at which electronic switching devices can be opened or closed using the standard technology has since proven a challenge, but a recent series of experiments — conducted at the University of Konstanz and published in the journal Nature Physics — demonstrates that electrons can be induced to move at sub-femtosecond speeds, ie, faster than 10-15 s, by manipulating them with tailored light waves.

“This may well be the distant future of electronics,” said Konstanz Professor Alfred Leitenstorfer, co-author of the study. “Our experiments with single-cycle light pulses have taken us well into the attosecond range of electron transport.”

Light oscillates at frequencies at least a thousand times higher than those achieved by purely electronic circuits: one femtosecond corresponds to 10-15 seconds, which is a millionth of a billionth of a second. Prof Leitenstorfer and his team at the University of Konstanz believe that the future of electronics lies in integrated plasmonic and optoelectronic devices that operate in the single-electron regime at optical (rather than microwave) frequencies, though Prof Leitenstorfer admits this may take decades to implement.

The challenge for the international team of theoretical and experimental physicists who collaborated on the project was to develop an experimental set-up for manipulating ultrashort light pulses at femtosecond scales below a single oscillation cycle on the one hand and to create nanostructures suitable for high-precision measurements and manipulation of electronic charges on the other. The experimental set-up involved nanoscale gold antennas as well as an ultrafast laser capable of emitting 100 million single-cycle light pulses per second in order to generate a measurable current. The bowtie design of the optical antenna allowed for a sub-wavelength and sub-cycle spatio-temporal concentration of the electric field of the laser pulse into the gap of a width of 6 nm (1 nm = 10-9 m).

As a result of the highly nonlinear character of electron tunnelling out of the metal and acceleration over the gap in the optical field, the researchers were able to switch electronic currents at speeds of approximately 600 attoseconds (less than one femtosecond). “This process only occurs at time scales of less than half an oscillation period of the electric field of the light pulse,” said Prof Leitenstorfer — an observation that the project partners were able to confirm and map out in detail by means of a time-dependent treatment of the electronic quantum structure coupled to the light field.

The study thus opens up new opportunities for understanding how light interacts with condensed matter, enabling observation of quantum phenomena at apparently unprecedented temporal and spatial scales. Building on the new approach to electron dynamics driven at the nanoscale by optical fields that this study affords, the researchers will move on to investigate electron transport at atomic time and length scales in even more sophisticated solid-state devices with picometre dimensions.

Image caption: Illustration of how electrons can be imagined to move between two arms of a metallic nanoantenna, driven by a single-cycle light wave. Image credit: University of Konstanz.