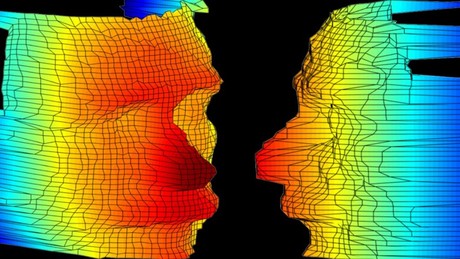 Researchers at Stevens Institute of Technology have created a 3D imaging system that uses light’s quantum properties to create images said to be 40,000 times crisper than current technologies, paving the way for lidar sensing and detection in self-driving cars, satellite mapping systems, deep-space communications and medical imaging of the human retina.

Published in the journal Nature Communications, the work addresses a decades-old problem with lidar, which fires lasers at distant targets then detects the reflected light. While light detectors used in these systems are sensitive enough to create detailed images from just a few photons — miniscule particles of light that can be encoded with information — it’s tough to differentiate reflected fragments of laser light from brighter background light such as sunbeams.

“The more sensitive our sensors get, the more sensitive they become to background noise,” said research leader Yuping Huang, Director of the Center for Quantum Science and Engineering at Stevens. “That’s the problem we’re now trying to solve.”

The technology is the first real-world demonstration of single-photon noise reduction using a method called quantum parametric mode sorting (QPMS), which was first proposed by Huang and his team in a 2017 Nature paper. Unlike most noise-filtering tools, which rely on software-based post-processing to clean up noisy images, QPMS checks light’s quantum signatures through exotic nonlinear optics to create an exponentially cleaner image at the level of the sensor itself.

Detecting a specific information-bearing photon amid the roar of background noise is like trying to pluck a single snowflake from a blizzard — but that’s exactly what Huang’s team has managed to do. The colleagues describe a method for imprinting specific quantum properties onto an outgoing pulse of laser light, and then filtering incoming light so that only photons with matching quantum properties are registered by the sensor.

The result is an imaging system that is incredibly sensitive to photons returning from its target, but that ignores virtually all unwanted noisy photons. The team’s approach yields sharp 3D images even when every signal-carrying photon is drowned out by 34 times as many noisy photons.

“By cleaning up initial photon detection, we’re pushing the limits of accurate 3D imaging in a noisy environment,” said doctoral candidate Patrick Rehain, lead author of the study. “We’ve shown that we can reduce the amount of noise about 40,000 times better than the top current imaging technologies.”

That hardware-based approach could facilitate the use of lidar in noisy settings where computationally intensive post-processing isn’t possible. The technology could also be combined with software-based noise reduction to yield even better results.

“We aren’t trying to compete with computational approaches — we’re giving them new platforms to work in,” Rehain said.

In practical terms, QPMS noise reduction could allow lidar to be used to generate accurate, detailed 3D images at ranges of up to 30 km. It could also be used for deep-space communication, where the sun’s harsh glare would ordinarily drown out distant laser pulses.

The technology could also give researchers a closer look at the most sensitive parts of the human body. By enabling virtually noise-free single-photon imaging, the imaging system will help researchers create crisp, highly detailed images of the human retina using almost invisibly faint laser beams that won’t damage the eye’s sensitive tissues.

“The single-photon imaging field is booming,” Huang said. “But it’s been a long time since we’ve seen such a big step forward in noise reduction, and the benefits it could impart to so many technologies.”

Image caption: Stevens Institute of Technology creates a quantum 3D imaging technique for use in self-driving cars, medical imaging of the human retina and deep-space communication.