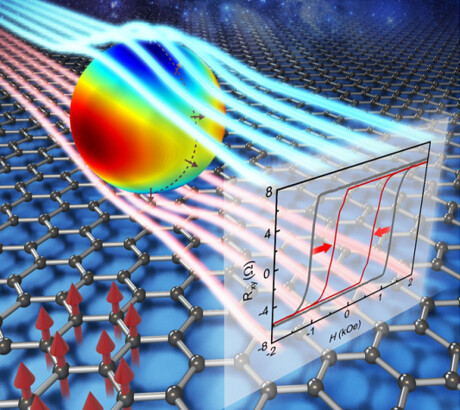 Researchers at South Korea’s Pohang University of Science and Technology (POSTECH) and Seoul National University have demonstrated a new way to enhance the energy efficiency of a non-volatile magnetic memory device called SOT-MRAM. Published in the journal Advanced Materials, their finding opens up a new window of exciting opportunities for future energy-efficient magnetic memories based on spintronics.

In modern computers, random access memory (RAM) is used to store information. SOT-MRAM (spin-orbit torque magnetic RAM) is one of the leading candidates for next-generation memory technologies that aim to surpass the performance of various existing RAMs, as it may operate faster and maintain information even after the energy supply is powered off. However, SOT-MRAM technology currently falls short of being satisfactory due to its high energy demand, as it requires a large energy supply (or large current) to write information.

A joint research team, led by Professor Hyun-Woo Lee from POSTECH and Professor Je-Geun Park from Seoul National University, has now demonstrated a way to enhance the energy efficiency without sacrificing the demand for safe storage. They reported that ultrathin iron germanium telluride (Fe3GeTe2, FGT) — a ferromagnetic material with special geometrical symmetry and quantum properties — switches from a hard magnet to a soft magnet when a small current is applied. When writing is not intended the material remains a hard magnet, only switching to a soft magnet when writing is intended. This allows for enhanced energy efficiency.

“Intriguing properties of layered materials never cease to amaze me: the current through FGT induces a highly unusual type of spin-orbit torque (SOT), which modifies the energy profile of this material to switch it from a hard magnet to a soft magnet,” Prof Lee said. “This is in clear contrast to SOT produced by other materials, which may change the magnetisation direction but cannot switch a hard magnet to a soft magnet.”

Experiments by Prof Park’s group revealed that this FGT-based magnetic memory device is highly energy efficient. In particular, the measured magnitude of SOT per applied current density is two orders of magnitude larger than the values reported previously for other candidate materials for the SOT-MRAM.

“Controlling magnetic states with a small current is essential for the next generation of energy-efficient devices,” said Dr Kaixuan Zhang, a team leader in Prof Park’s group. “These will be able to store greater amounts of data and enable faster data access than today’s electronic memories, while consuming less energy.”

Image caption: The transformation of a hard magnet into a soft magnet when current is applied.