Molecular memory could increase the capacity of hard disks 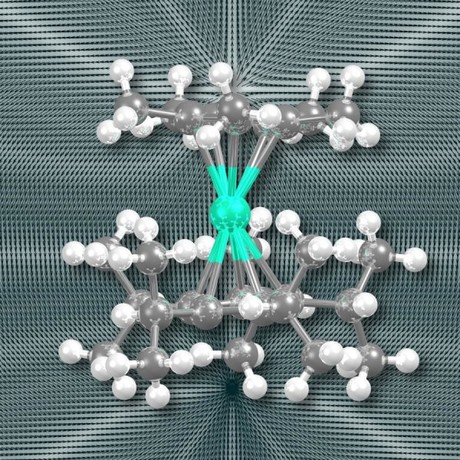 The first molecule capable of remembering the direction of a magnetic field above liquid nitrogen temperatures has been prepared and characterised by scientists. The results, published in the journal Science, may be used in the future to massively increase the storage capacity of hard disks without increasing their physical size.

Single-molecule magnets are molecules capable of remembering the direction of a magnetic field that has been applied to them over relatively long periods of time once the magnetic field is switched off; thus, one can ‘write’ information into molecules. Single-molecule magnets have potential applications, for example, as high-density digital storage media and as parts of microprocessors in quantum computers.

Practical applications have, however, been greatly hindered by the fact that single-molecule magnets are operational only at extremely low temperatures. Their intrinsic memory properties often vanish if they are heated more than a few degrees above absolute zero (-273°C); therefore, single-molecule magnets can be only studied under laboratory conditions by cooling them with liquid helium.

Now, researchers taking part in an international British–Finnish–Chinese collaboration have reported a chemical strategy to access the dysprosium metallocene cation which displays magnetic hysteresis above liquid-nitrogen temperatures. The scientists successfully synthesised and characterised a single-molecule magnet which retains its memory properties above the temperature of liquid helium (-196°C), resulting in what could be called the first high-temperature single-molecule magnet.

“When considering our everyday life, liquid nitrogen is extremely cold,” said postdoctoral researcher Akseli Mansikkamäki from Finland’s University of Jyväskylä. “However, compared to liquid helium, which has so far been required to study single-molecule magnets, the liquid nitrogen temperature is a huge leap upwards. Liquid nitrogen is more than 300 times cheaper than liquid helium and much more readily available, enabling technological applications. Therefore, the research constitutes an important scientific milestone.”

The new dysprosium metallocene compound is the culmination of several years of research, requiring the development of new approaches in organometallic lanthanide chemistry and deep insights into the relationship between the microscopic electronic structure and magnetic properties of the studied systems.

“Computational methods based on quantum mechanics and the theory of relativity play an important role in the characterisation and design of new single-molecule magnets,” Mansikkamäki said. “The large computational resources available today have enabled [us], for example, to clarify the interaction between crystal vibrations and the electronic structure of molecules studied in the present work.”

The research also provides new insights and guidelines on how to further improve the magnetic properties of single-molecule magnets and how to bring technological applications closer to reality.