Ultrathin camera inspired by a wasp 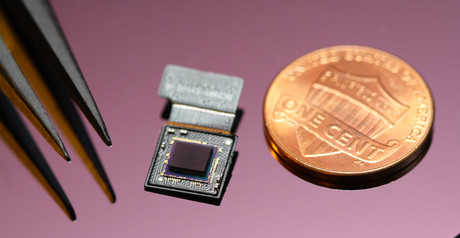 Inspired by the biological vision systems found in nature, researchers from the Korea Advanced Institute of Science and Technology (KAIST) have created an ultracompact camera that captures high-contrast and high-resolution images.

Fully packaged with micro-optical elements such as inverted micro-lenses, multilayered pinhole arrays and gap spacers on the image sensor, the camera features a total track length of 740 μm and a field of view of 73°. It has been described in the journal Light Science & Applications.

An insect’s compound eye has superior visual characteristics, such as a wide viewing angle, high motion sensitivity and a large depth of field while maintaining a small volume of visual structure with a small focal length. The eyes of the paper wasp species Xenos peckii and an endoparasite found on paper wasps have hundreds of photoreceptors in a single lens, unlike conventional compound eyes. In particular, the eye structures of an adult Xenos peckii exhibit hundreds of photoreceptors on an individual eyelet and offer engineering inspiration for ultrathin cameras or imaging applications because they have higher visual acuity than other compound eyes.

The eye-inspired cameras are said to provide a 50 times higher spatial resolution than those based on arthropod eyes. In addition, the effective image resolution of the Xenos peckii’s eye can be further improved using the image overlaps between neighbouring eyelets. This offers higher visual resolution than other insect eyes. 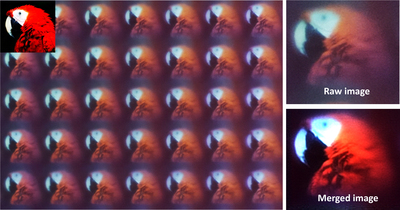 This is said to be the first demonstration of super-resolution imaging which acquires a single integrated image with high contrast and high resolving power reconstructed from high-contrast array images. It is expected that this ultrathin arrayed camera can be applied for further developing mobile devices, advanced surveillance vehicles and endoscopes.