Charge your phone in a cup holder 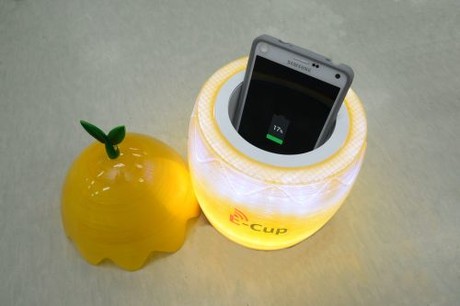 A cup holder that wirelessly charges electronic devices in a 3D space has been developed by the Electronics and Telecommunications Research Institute (ETRI) in South Korea.

Shaped just like a circular cup holder with a 10 cm diameter, the wireless ‘E-Cup’ generates and maintains a constant and uniform magnetic field. The electric current wirelessly flows to the batteries inside electronic devices based on the magnetic resonance. What’s more, the technology can charge multiple devices at the same time, at the same rate as wired chargers, regardless of orientation or position.

But while the E-Cup matches the speed of wired chargers, it is less efficient; its power conversion reaches to about 60% when calculated in terms of DC-to-DC conversion. The ETRI team is working on raising that to 70% before the product can be commercialised.

“The newly developed technology has a wide range of potential applications, including phones, although it is still in infancy,” said Dr Ho-Jin Lee from the Radio & Satellite Research Division of ETRI. “But at the same time it has a great potential to be improved.”

ETRI has been working on wireless charging for several years, in 2015 beginning development of a 3D wireless charging technology based on magnetic resonance for electric bikes, drones and smart devices. They succeeded to overcome the limitations of its 2D design and expand to 3D design to accelerate the freedom of charge without a loss of efficiency.

The research team believes their smartphone charging technology can be applied to all areas of industry, with the market for wireless charging devices expected to grow to nearly US$1 billion in 2022, according to MarketsandMarkets. They are also focused on developing highly efficient and safe wireless energy transfer technologies applicable to charge multiple devices in huge spaces, such as living rooms.

Spanish researchers have made it possible to anticipate the possible faults a chip may suffer and...