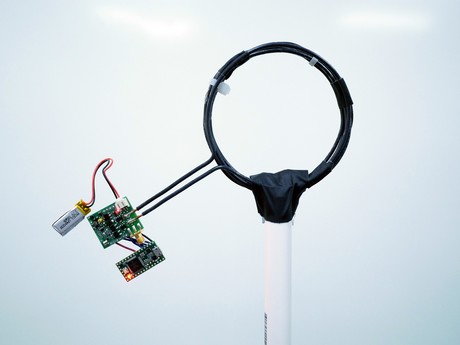 Researchers from the University of Tokyo, Disney Research and the University of Michigan have created and demonstrated a room-sized device which uses magnetic fields to charge compatible devices inside it. Their work has been described in Proceedings of the ACM on Interactive, Mobile, Wearable and Ubiquitous Technologies.

“The Internet of Things is coming,” said doctoral student Takuya Sasatani, who led the research. “People will soon find their environments populated by small sensors and other devices which need power and communication. We have a safe and elegant solution for this, and it too could help technology become more invisible.”

The wireless power transfer system can simultaneously charge multiple devices — or nodes — within the confines of a room. Metal sheets and electrical components are embedded within a column in the centre of the room and the structure of the room itself. As the functional elements of the system are integrated into a room, this approach is most suitable for inclusion in new buildings, although the research team also explore ways to retrofit existing environments.

For the system to work, researchers exploit a phenomenon called quasistatic cavity resonance. Here, oscillating magnetic fields confined to a certain volume induce the flow of charge in devices possessing specially designed coils. The magnetic field swirls around the room and the electric field is confined to the components embedded within the central pole. 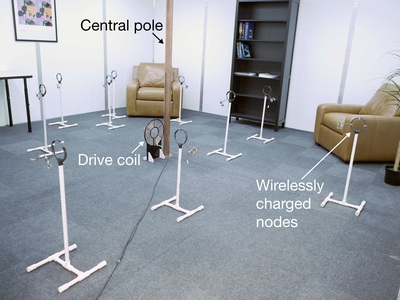 Device nodes can be around one two-thousandth the size of the room charger itself. Image ©2019 Sasatani et al.

“Safety is our prime concern and we will make sure that future deployments of our system meet all governmental regulations for health and safety,” Sasatani said. “We use magnetic fields well within safety limits for human proximity and the electric field is isolated by capacitors in the central column. Conversely, the presence of people should not affect power transfer efficiency. It even plays well with Wi-Fi, though our system provides an alternative communication link with small power consumption. This can drastically extend battery life of the numerous low-power devices installed in our surroundings.”

An essential feature of devices such as sensors is they communicate their data periodically. The researchers engineered a way for compatible devices to send and receive data through the same mechanism which powers them. Compatible devices communicate with the central system at several kilobits per second by modulating a power signal in a method analogous to how AM radio works. While not yet suitable to stream videos, it’s enough to communicate many kinds of ambient data that sensors are likely to collect.

“The combined power and data capacity of our system potentially makes it suitable for environments such as hospitals, greenhouses, labs, event spaces or your home,” Sasatani said. “We will continue to innovate and improve power transfer loads and communication bandwidth, while ensuring compatible devices will be cheap and easy to manufacture.”

As well as being cheap to manufacture, the system should also prove inexpensive to run, using about 10 watts of power — equivalent to an efficient LED lightbulb.

Top image caption: Nodes receive about a watt of power; researchers aim to increase this to tens of watts. Image ©2019 Sasatani et al.

Altium has announced the launch of the Upverter Education program based on Upverter — a...

The Trusted Computing Group has announced its latest guidelines and best practices for software...